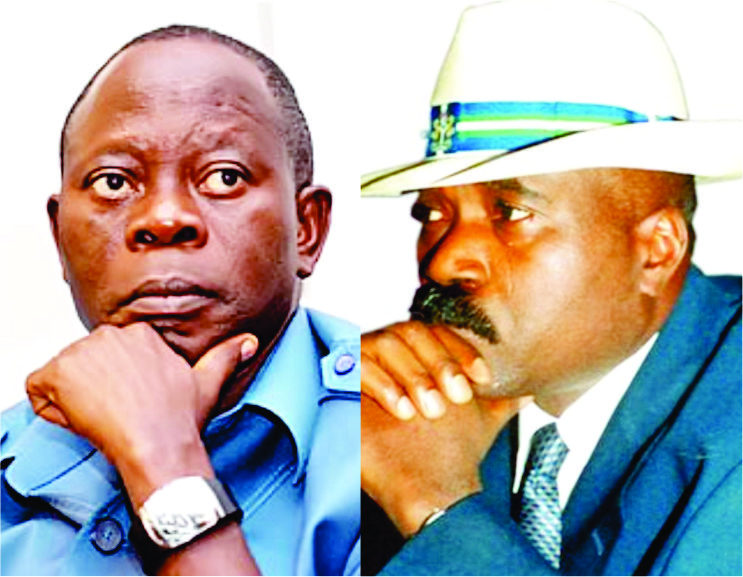 •As battle for governor’s successor increases

FORMER Governor of Edo State, Chief Lucky Igbinedion has dared the incumbent governor, Comrade Adams Oshiomhole to drag him to the Economic and Financial Crimes Commission, EFCC over allegations that he (Lucky) siphoned huge sums of money while presiding as helmsman of the government, including allocating large plots of land to his father, Chief Gabriel Igbinedion, the Esama of Benin Kingdom.
The visibly angry former governor told close associates that Oshiomhole could‎ not go beyond the current rabble rousing, revealing that he had a complete dossier of the massive acquisitions of the Comrade Governor within and outside the shores of Nigeria.
Said he: “The man (Oshiomhole) is a bloody coward. He is just a ra‎bble rouser. He cannot do anything more than making noise. If he’s truly serious, let him go to the EFCC. I am very ready to expose him as the biggest crook that has ruled Edo State”.
National Daily gathered that the ex-governor has ignited his seemingly docile structure to tackle what pundits regard as an affront by Oshiomhole on a man who reportedly funded and installed him as governor of Edo State despite all odds.
Aides of the Comrade Governor particularly fingered Igbinedion as the mastermind of last week’s protest by half naked women in Benin City calling for Oshiomhole’s removal due to alleged non performance.
Benin City, the capital of Edo State woke up Tuesday morning to see the half naked women, most of them very old protesting the governor’s alleged misrule, a development many have interpreted a curse and regard as sacrilegious.
The protest came few days after the Comrade celebrated his seventh year in office, an occasion he also‎ used to expose Igbinedion’s alleged many sins.
Apart from protests, many other strategies aimed at humiliating Oshiomhole were said to be in the offing, although aides of the governor were upbeat that their principal, a former President of the Nigeria Labour Congress, NL‎C would triumph at the end of the day.
But insiders have revealed that the faceoff between two political heavyweights is beyond the so called anti corruption posture of the state Government, pointing out that it is the battle for who succeeds Oshiomhole that has degenerated into mudslinging. National Daily learnt that disagreements over who takes over government house next year is at the heart of the current holabaloo‎, prompting name callings and other machinations, a development that guarantees that there will be no cessation of hostilities until the conduct of the gubernatorial polls.
Oshiomhole, leader of the ruling All Progressives Congress, APC is said to have pitched his tent with Mr Osarodion Ogie, presently the State Commissioner for Works as a successor, while Igbinedion, leader of the rival Peoples Democratic Party, PDP is for Prince Ize Iyamu, an influential Pastor in the Redeemed Christian Church of God, RCCG.
Igbinedion’s stance was said to have been buttressed by the fact that Oshiomhole had earlier agreed to handover to Iyamu as a condition for getting the former governor to support him secure the first term ticket.
Those in the know claimed that it was Iyamu, then Vice Chairman, South-South of the defunct Action Congress of Nigeria, ACN who convinced Oshiomhole to dump the Labour Party, LP and subsequently took him to Igbinedion to get financial and other strategic support that enabled him become governor.
Although Igbinedion and Iyamu belong to the PDP, their insistence that the latter must take over the reins of government next year was said to have sparked off a war of attrition which has since blossomed into open confrontation between the two political gladiators.

Share this on WhatsApp
Related Topics:Edo State Govt.EFCCEsamaIgbinedionOshiomhole
Up Next

Ohaneze should speak for Ndigbo on Biafra, not Governors