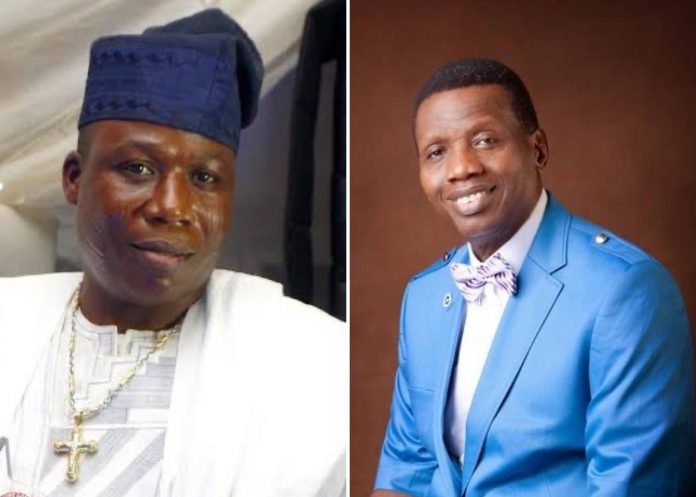 Sunday Adeyemo popularly known as Sunday Igboho, has explained that he never insulted the General Overseer of the Redeemed Christian Church of God (RCCG), Pastor Enoch Adeboye, over the demise of his son, Dare.

Recall that there were reports that he rained curses on any leader or cleric who refuses to support the secession agenda, saying God will kill their children and wives.

In the viral video, Igboho’s aide, Olayomi Koiki, had asked him (Igboho) to commiserate with Adeboye over the death of his son, Pastor Dare Adeboye.

But the visibly infuriated Igboho asked if the man of God had declared his support for the Yoruba nation.

He said: “Has Baba supported the Yoruba nation that we will now be greeting him? We don’t need to greet Adeboye. What is my own with that? We are not doing church here. This is not religion.

“God himself will judge those who have not supported us, may He continue to kill their wives and children since they don’t want us to reach our promised land.”

But Igboho in another viral video has backtracked saying he never insulted Adeboye but was referring to elders who were sabotaging the efforts of the Yoruba Nation.

He said: “May we not experience untimely death, I did not insult Baba, or speak ill of him or the dead. If you look at the video, you’ll see that it was not related to him.

“I only placed curses on all elders who have powers and can help the Yoruba nation but have refused to help the struggle. I was referring to the elders, why will you have power? Influence? And you can see how we are suffering and being killed, you are supposed to pity and help us.

“God knows when we’ll all leave this world, he owns us, and we’ll all die someday. I did not mock the Adeboye family over their son’s demise.

“May God forgive us all, and grant Baba Adeboye a long life. I did not abuse him. I only placed a curse on those who are sabotaging the efforts of the Yoruba Nation.

“Please I want to implore all Yorubas not to create confusion over the current struggle. He is a pastor, I’m a Christian, So how can I be abusing a cleric? I did not abuse or mock him. Let people desist from spreading such information.