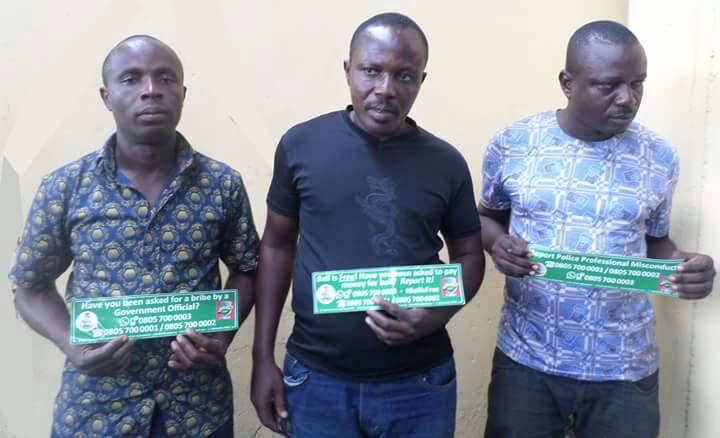 Share this on WhatsApp
Spread the love
Three policemen of the Lagos State Police Command have been sacked on the order of the Inspector General of Police, Ibrahim Idris for engaging in illegal arrest and extortion.
The dismissed officers were attached to Area ‘N’ Command Ijede-Ikorodu under the Lagos State Command and were identified as Inspector Okelue Nkemeonye, with service AP No 136005; Sergeant Braimoh Sunday with Force No. 355897and Sgt. Yusuf Olukoga with Force No. 359928.
National Daily gathered that the decision was in line with the current drive of the Inspector-General of Police to flush out unethical officers who are giving the Nigeria Police Force a bad image.
The dismissed officer were said to have faced an Orderly Room trial at the Zone 2 Command Headquarters, Onikan-Yaba, Lagos.
They were found guilty by the adjudicating officer on a two count charge bordering on indiscipline as provided for in paragraphs C; Corrupt Practices and E; Discreditable Conduct of the First Schedule of Police Act and Regulations Cap. P19. Law of the Federation of Nigeria 2004.
It was learnt that the officers were arrested following a complaint laid by a complainant to the Public Complaint Rapid Response Unit (PCRRU) via WhatsApp number 0805 700 0003 on the 21st June, 2017.
The Public Complaint Rapid Response Unit (PCRRU) said the complainant who didn’t disclose his name explained, “My name is (withheld), I went to the bank this morning to deposit money to a Company’s account (name withheld) but there was no network so I deposited the money into my personal account to do the transfer to the account later.
‘When I came out of the bank, a car packed full of some SARS policemen wearing black cloth with anti-robbery squad written at the back ordered me to enter the vehicle with a gun pointed at me.
“They collected my mobile phone and asked me what I do for a living and I told them that I had just finished my youth service and was staying with my brother,” he said.
He further added that “I pointed at my brother shop so that they could stop by and see him because he was the one that sent me to the bank. However, they refused to wait and did not allow me to pick my calls or call out.
“In the process, I received an alert on my phone for the money I went to deposit. When saw the alert on my phone, they roped me in with the allegation that I was a yahoo boy (419).
ALSO SEE: Police officers arrested for handcuffing a suspect to generator
“They requested that I would pay them N1 million. Immediately, one of the policemen slapped me. They drove me around places in Ikorodu, ijede, gberigbe, Ibeshe, Igbe, Ikpakodo, Itaelewa, Agric and First Gate harassing people, moving them into the car and collecting huge amount of money from them.

“They collected N50, 000 from me but I notice that in every junction that we reached,people were hailing their leader by his nickname (OJ. Ojewunmi).

“One of them named Austin slapped me. They picked me up around 9am and dropped me about 6pm in the evening after collecting money from me. They even used my account to collect money from the guys that I met in the car and used my ATM to withdraw from them,” he reiterated.
National Daily learnt that “Upon the receipt of the complaint, a case with Tracking Number #PCRRU637624 was registered and acknowledgment of complaint sent to the complainant.
“PCRRU Investigation team was dispatched to Ikorodu where all the three dismissed policemen including AP No. 98199, ASP Bayo Obadia who led the team were apprehended.
However, PCRRU preliminary investigation revealed that all the allegations contained in the WhatsApp message actually took place.
It was also learnt that the four police officers who were armed on the day of the incident falsely paraded themselves as operatives of Special Anti-Robbery Squad (SARS) despite not being posted to SARS by police authorities.
They were said to have extorted about N200,000 from the young men who they tagged “Yahoo Yahoo Boys” as they forcefully withdrew N90,000 through ATM and N110,000 mobile bank money transfer to a third party’s account provided by the policemen.
The arrested officers, witnesses and recovered exhibits including the N200,000 cash and printed bank statement of account were handed over to the Assistant Inspector-General of Police, Zone 2 Lagos for further detailed investigation and necessary disciplinary measures.
However, ASP Bayo Obadiah, who led the team of the infamous men on this unacceptable conduct, an Official Query was issued to him by the AIG Zone 2 Lagos, both his reply and Query has been forwarded to the office of the Force Secretary, Force Headquarters, Abuja from where it would be proceeded to the Police Service Commission as required by Police Regulations.
The IGP has also said that all allegations of professional misconduct reported against any police officer would be treated in line with relevant laws and in keeping to the “Change Begins With Me” campaign of the Federal Government.
Share this on WhatsApp
Related Topics:ExtortionIbrahim Idrisillegal arrestInspector General of PoliceLagos State Police CommandOnikan-YabaOrderly Room trialZone 2 Command Headquarters
Up Next