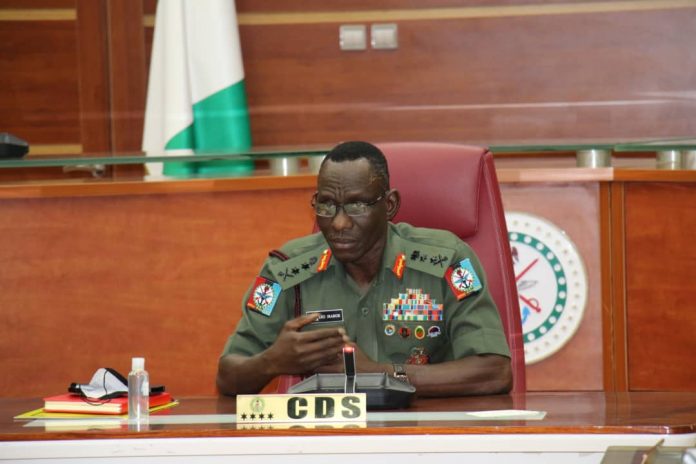 The Chief of Defence Staff (CDS), General Lucky Irabor has reiterated that the Armed Forces of Nigeria (AFN) under his watch is committed to forging stronger synergy between the Services and other security agencies in order to re-energise its counterinsurgency operations in the North-east region.

Gen Irabor, who was represented by the Chief of Defence Training and Operations, Major General Adeyemi Yekini, recounted that the AFN has been involved in the counterinsurgency operation for over a decade.

The CDS noted that the formation of a Theatre Command as well as Maritime Task Force and Air Task Force components are evolving strategies and tactics adopted to effectively weaken the insurgents.

The Defence Chief further explained that the AFN is committed to forging stronger synergy within the Services and other security agencies.  These efforts, he noted, are aimed at combating “the amorphous nature of the threat.”

Gen Irabor also recalled that OPSC, a non-kinetic operation, was established in 2015 with the mandate of De-radicalization, Rehabilitation and Reintegration (DRR) of willing and repentant low profile ex-members of the insurgent group.

He described the DRR progamme as a model which has been replicated in all the Lake Chad Basin countries.

He however, debunked allegations that the over 1,000 repented ex-insurgents are being recruited to the Nigerian military.

The Coordinator OPSC, Brigadier General Joseph Maina in his welcome address, averred that the stakeholders’ meeting is to fashion out modalities for the smooth transfer of 559 low risked repentant ex-members of the insurgents group who are currently undergoing the DRR programme to their State Governments and nationals.

The OPSC Coordinator highlighted that during the close door session issues such as, the roles of State Governments, Ministries, Departments and Agencies (MDAs) in the transfer and reintegration process would be discussed.