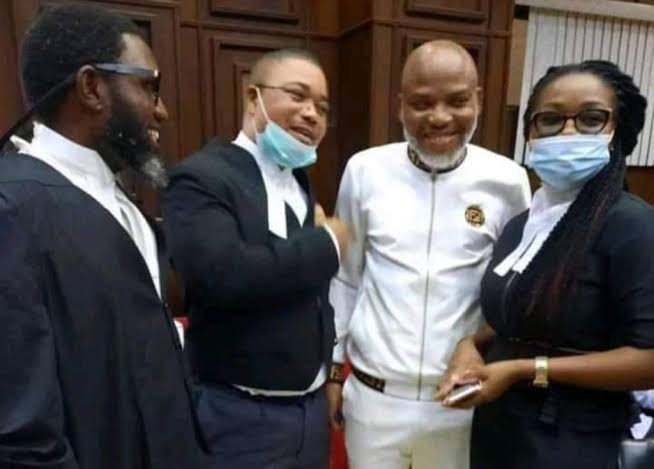 Justice Binta Nyako of a Federal High Court, Abuja, on Wednesday, ordered the Prosecution Counsel, to pay N200, 000 for stalling the day’s proceeding in the trial of co-defendants in Nnamdi Kanu on treasonable felony charge.

Justice Nyako ordered that each of the four defendants be paid N50,000 by the Attorney-General of the Federation (AGF) for the inconveniences they suffered as a result of the lead counsel, Shuaib Labaran’s absence in court.

The National Daily reports that the four defendants are Bright Chimezie, Chidiebere Onwudike, Benjamin Maduagwu and David Nwaurusi said to be members of the proscribed Indigenous People of Biafra (IPOB).

They are being tried alongside Mr Kanu, leader of the IPOB.

The judge, who was unhappy the way the trial was truncated, ordered that the N200, 000 must be paid to the defendants before the next adjourned date.

She then fixed March 17 for trial continuation.

Earlier at the resumed trial, there was no legal representation for the Federal Government at the time the matter was called.

However, as the Nyako was about to take adjournment, an officer from the Federal Ministry of Justice, Mrs Adewumi Aluko, came in and apologised that the lead counsel travelled out of the country.

She informed that though two witnesses were in court, she would not want to proceed in the absence of the lead counsel and sought for an adjournment.

The defendants, through their lawyer, Ifeanyi Ejiofor, complained bitterly the hardships suffered to raise funds for their transportation to Abuja.

The judge, who was unhappy over development, advised the prosecution to be more serious in the trial.

Nyako also counselled the defence lawyers to stop using frivolous applications to delay the trial which started since 2015.

She then fixed March 17 for resumption of the trial.

They are facing trial on three-count charge bothering on treasonable felony.

Earlier, the defendants were being tried alongside Kanu for alleged treason, but his (Kanu’s) absence in previous court sittings had prompted the Federal Government to file separate charges against them.

Nyako had acceded to a bail application filed by their lawyer on the grounds of their health condition and prolonged stay in detention.

The judge granted each of them bail of N10 million and ordered them to produce two sureties in like sum.

She also barred them from granting any interview to the press or appearing in a public gathering, similar to the conditions given to Kanu when he was granted bail.

In May 2017, Chimezie was granted bail by the Federal High Court in Uyo but he had remained in the custody of the Department of State Service (DSS) since then.

Condemning his continued detention, the judge noted the four defendants had spent an average of three years in custody when the penalty for their alleged offences ranges from five to seven years.

As part of their bail conditions, she also ordered the four of them to report to the commissioner of police in their respective states every two weeks.