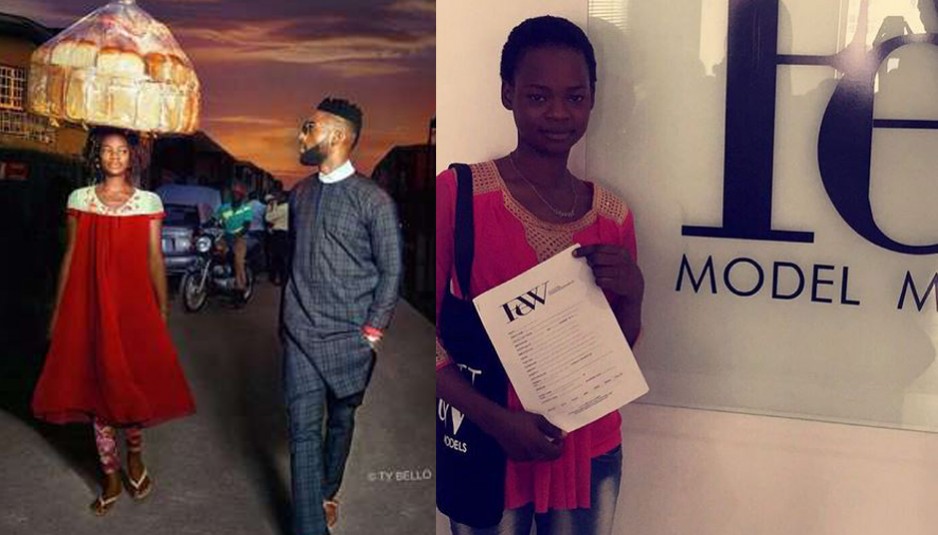 They leave the comfort of their homes and loved ones especially their husbands and children to eke out a living. These mostly semi illiterate hawkers attached themselves to bakeries and live in human communes, Lagos rent is not what a hawker, who plough the streets with N3000 bread ware will dare.

Fate smiled on one of themJumoke Sunday Orisaguna“Jumoke the bread seller” who strayed into an outdoor photo shoot session and became the Queen of Style.

Her story has inspired millions of people around the world. We bet you are asking what next for bread seller turned covergirl Olajumoke Orisaguna.After her shoot with Ty Bello, Olajumoke is now very famous!

Since she is 27 years old and a mother of 2, you may think it is too late for Olajumoke to begin a conventional modelling career. That’s not entirely true. She has been signed by Few Models. A top Lagos-based modelling agency. The company created a new division for her – Few Stars.

Online retailer Payporte has indicated interest in featuring Olajumoke in their next billboard campaign.

Jumoke cannot speak English, Olajumoke can read and write Yoruba. According to Ty Bello, she has a dream of becoming a Yoruba movie actress.

Olajumoke apprenticed as a hair stylist in her home town. Unfortunately, her family could not afford to pay for her “freedom”, the ceremony at the end of the apprenticeship which signifies the completion of the programme and allows her to start her own business or work elsewhere.

However, she has now been offered an opportunity to train with leading hair salon, Make Me owned by Ugo.

Olajumoke is a married mother of 2. She moved to Lagos with her baby daughter because times were so hard back home in Ire, Osun State. She left her other child back home with her husband. Jumoke’s husband has lovingly turned up to give support to his wife.

It is a misnomer to tagged Jumoke an illiterate says Magi Micheal CEO MM Models. Modeling is not about language. All international runways have models who do not speak English.

Share this on WhatsApp
Related Topics:TrendTY Bello“Jumoke the bread hawker”
Up Next