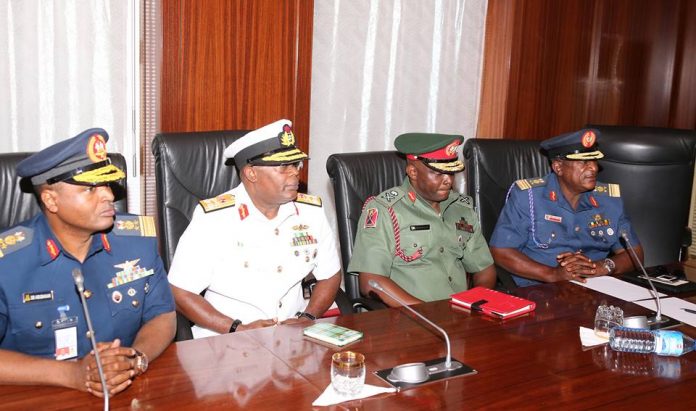 President Muhammadu Buhari is currently holding a meeting with the Service Chiefs including the National Security Adviser, NSA, and the Inspector General of Police (IGP), Mohammed Adamu at the State House, Abuja.

The meeting also has the Minister of Defence, Dan Mansur-Ali, Minister of Interior, Abdulrahman Dambazau, the Director General of Department of State Service (DSS) Yusuf Bichi and some other security heads in attendance.

The State Governors at the meeting who are mostly from the north include the Borno State, Kashim Shettina, Kaduna State, Mallam Nasir el-Rufai, and Adamawa State, Jubrila Bindow.

Also present is the Chief of Staff to the President, Abba Kyari and the Secretary to the Government of the Federation (SGF), Boss Mustapha.

The agenda of the meeting was yet unknown but it may not be unconnected with the alleged killing in a Kaduna community at the eve of the botched Presidential and National Assembly elections and the perhaps the forthcoming elections.