Many houses have reportedly been set on fire in Kajuru local government in an outbreak of violence in Kasuwan Magani, area of Kaduna state.
Details of the violence are still sketchy but a source said it had to do with the abduction and forceful conversion of some girls by a religious group.
Kasuwan Magani is 31 kilometers away from Kaduna city. It is located on the highway that links the state to Plateau, Nasarawa and Benue states.
Massive security personnel have reportedly been deployed in the area.
Meanwhile, some of the students kidnapped from Government Girls Technical College, Dapchi, Yobe state, have been taken to Niger Republic, according to a report.
Quoting a source, the report said the girls were split into two groups; with some kept in Borno state.
The Musa Albarnawi faction of Boko Haram is suspected of being behind the kidnap. The Albarnawi faction is loyal to the Islamic State of West Africa.
The group was responsible for the kidnap of some University of Maiduguri lecturers who were conducting an oil research in Borno state last year.
While some were killed, those abducted regained freedom, earlier in the month.
The report mentioned the location where the girls are reportedly kept.
“The girls ferried across a shallow river and are held in the border town of Duro in Niger Republic,” the source was quoted to have said.
“The second batch has been moved to Tumbun Gini area of Abadam LGA of Borno.”
President Muhammadu Buhari has described the abduction as a “national disaster”, urging security agencies to ensure that the 110 girls are found.
During a visit to Yobe, Ibrahim Shetimma, governor of Borno, expressed worries that the Dapchi incident is a sad reminder of the Chibok schoolgirl’s saga of 2014.
Shetimma urged residents to cooperate with the security services to unravel the mysterious Dapchi kidnap.
“Neither denial, nor conspiracy theory as was done in the case of Chibok girls abduction under PDP-led Federal Government. We should learn to separate politics from human lives,” he said.
Boko Haram had abducted 274 students from Government Secondary School, Chibok, Borno state in April 2014 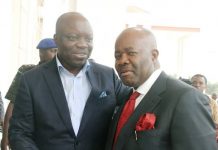