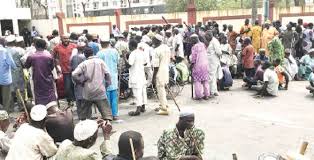 Scores of beggars mobilized themselves and bussed in for an angry rally at the Governor House, Alausa, Ikeja, demanding a number of things they claim are their rights from the state government on Wednesday.

The beggars, refusing pleas by government officials, barricaded the entrance to the Assembly and demanded that Governor Babajide Sanwo-Olu address them, or else they will lie down on the road.

Chanting Allau Akbar, they also carried placards screaming:  ‘Enough is enough, stop the persecution of people with disabilities’; ‘If you don’t want to see us begging on the streets, give us skills and empowerment’; ‘Seeing beggars all over our streets and roads is the failure of the system,’; and ‘We are tired of running without legs or eyes, give us skills and empowerment.’

Mohammed Zanna, the coordinator,  the Physically Challenged Empowerment Initiatives, narrated how the group’s 2017 protest at Alausa ended I detention at Majidun where many of them died for lack of care.

According to him, some of the beggars and other peopleliving with disabilities (PLWDs) had purchased tricycles to make a living when the government banned the operators in some parts of the state.

He said since the okada and keke ban, beggars and other PLWDs have been trekking from bus stops to their destinations.

“We cannot enter buses because we cannot fight and struggle. We are seeking audience with the governor. Let him tell us what they want to do with us. We need skills and empowerment. We are tired of sitting at home. We are demanding to be skilled,” he said.

“We do not want to beg on the streets. We have used our own ingenuity and resources to provide alternative livelihoods for ourselves that are more dignified, safer and productive to society.

He said his group is ready to work with government to find workable alternatives through appropriate regulation of keke, special permits for people living with disabilities to use our keke for the transportation of our members or real and immediate support for alternative livelihoods through skills training and support for us to start new businesses.

Sanwo-Olu has said there is no going back on the okada ban.