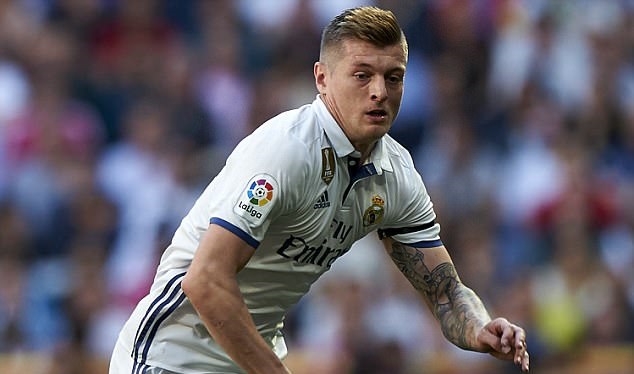 Share this on WhatsApp
Spread the love
By Boluwatife Ezekiel Olaleye
Real Madrid midfielder, Toni Kroos has professed he does not regret his decision to ditch Bayern Munich for Madrid.
The Germany international left his boyhood club of Bayern Munich three years ago to join La Liga giants, Real Madrid.
Kroos has become a force to reckon with at the Los Blancos, winning the La Liga and back-to-back UCL trophies.
“My change of team was correct, in fact, from my point of view there is no doubt about it,” Kroos said in an interview with the German Football Association (DFB).
ALSO SEE: Floyd Mayweather declares he is now a Billionaire
“Clearly, if you go abroad to a top club, it means one more step in your development.
“Carlo Ancelotti wanted me in Madrid, and had bet on me.”
On his one season with former Bayern head coach Pep Guardiola in Bavaria before moving to the Spanish capital, Kroos added: “I wouldn’t undervalue my year under Pep Guardiola because I think I made a big step forward in that year.
“I look at my career in phases: Jupp [Heynckes] was the most important coach in the early stages of my career, both at Leverkusen [during a loan spell] and then in Munich as well.
“Pep Guardiola saw me as a central player in his system, which my style of play fit into perfectly.”
Share this on WhatsApp
Related Topics:Bayern MunichGerman Football Association (DFB)Real MadridToni Kroos
Up Next

Pique to play for Spain despite Catalonia support