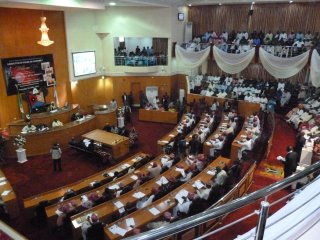 The Lagos House of Assembly summons the state Attorney General and Commissioner for Justice for having over stepped operational boundaries, sequel to his request that the house suspends legislative actions of 15 pending executive bills and regulations before the Assembly.

The AG’s office had earlier written a letter dated Nov. 2 requesting the Assembly to revive the pending executive bills originated in the seventh Assembly.

The ill feeling was incensed by  the request for Suspension of Legislative actions on Executive Bills and Regulations by the Attorney General in a letter read on the floor of the Assembly by the Clerk of the House, Mr Ganiyu Abiru.

The letter read in part, “Legislative actions were not completed on some of the bills and regulations before the end of the 7th Assembly.

“Steps were being taken to revalidate the legislative action by concerns ministries and agencies to ensure that the content of the bills and regulations  are aligned to the policy decisions and programmes of the present administrations.

“We hereby kindly request for the suspension of actions on the following executive bills and regulations.
Lagos State Revenue Administration 2012.”

The lawmakers took turns to condemn the directive stressing that the Attorney General had no powers to influence the ways the Assembly would conduct his business.

Hon. Bisi Yusuf, member representing Alimosho1 constituency lampooned the state’s attorney general for the tone of the letter which compulsioned the house to halt legislative activities as it pertains to the specified bills.

Yusuff said that the Office of the Attorney General could institute amendment to the bill rather than ordering the Assembly on his duty.

Hon. Lanre Ogunyemi representing Ojo1 constituency also reacting to the perceived highhanded mien of the AG, noted that,” if there is any amendment to the bills conceived by the executive, it can be so forwarded to the Assembly.

“I don’t know of any power the Attorney general has to ask the assembly to suspend legislative actions on bills. I don’t think we should allow executive- legislative frictions.”

Hon. Abiodun Tobun Epe 1 said the Assembly was elected by the people and must serve the people conscientiously.

Hon.Giwa Sola Lagos Island 2 counseled that the attitude of the AG may be due to little or know knowledge about legislative/executive boundaries, he thus rooted for a parley between the legislature and the executive for proper understanding.

Responding, the Speaker Rt. Hon.Mudashiru Obasa directed the Clerk to write the Attorney General and Commissioner for Justice to meet with the principal officers of the House.

Obasa stated that the commissioner would get things right after the parley stressing that he was new on the job.