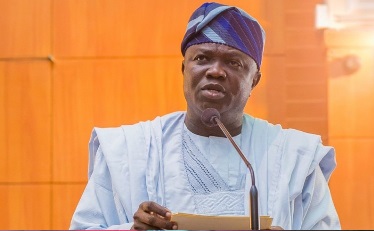 LAGOS State Government has revealed its commitment to speedy completion of the on-going construction of drainage alignment and the bad portion of the Ile-Epo axis of the Lagos Abeokuta Expressway, assuring that the project will be delivered by April 2016.
Speaking during an inspection tour of the project site, Engr. Ayotunde Sodeinde, General Manager, Lagos State Public Works Corporation (LSPWC), disclosed that the drainage work with a stretch of about 840 meters and the bad portion of the roads which is about 1000 meters will soon be completed. According to him, the corporation has already reconstructed 750 meters of the drainage while the remaining 100 meters will be completed by January 24. He said Lagosians currently having a harrowing experience while plying the road will soon heave a sigh of relief as rehabilitation work on the road will be completed by April 2016.
Sodeinde said the rehabilitation work which commenced in October 2015 was put on hold until the six electricity poles laid on the drainage alignment were removed on December 31st, 2015.
The LSPWC boss, who recalled that the initial drainage system with a width of 0.6 meters was inadequate to contain the flow of flood water, said the agency had to reconstruct it to a size of 1.2 meters after which massive rehabilitation work commenced on the road. Sodeinde said the Lagos-Abeokuta road project was already a failed project right from inception recalling that sometimes in 2013, a portion of the road along Ahmadiyah caved in, causing untold hardship to motorist.
He stressed that similar scenario is playing out at the Ile-Epo axis with inadequate drains to contain rainwater and other domestic discharge which in-turn has a negative impact on the road.
Besides, Sodeinde recalled that sometimes during the inspection of the bad portion of Ile-Epo by Governor Akinwunmi Ambode and his team, they met an inadequate drainage and the Governor swiftly reacted that the situation in that area was totally unacceptable; and that the LSPWC should immediately move in and fix the road.
“We moved in October ending and what we met here was a terrible state of the road with inadequate and blocked drains which hinders the flow of rain water. Governor Ambode does not believe that a particular road is Local, State or Federal. He believes so far those roads are being used by residents of Lagos State, that all the roads must be fixed and motorable, and that was why the Governor directed that we should move in immediately to fix the road despite the fact that it is a federal road,” Sodeinde said.
He pleaded with the traders in the popular Ile-Epo Market to dispose off their refuse in designated dump sites, while also cautioning them that those found defaulting will be handed over to the Task Force of the Ministry of Environment proper sanctioning.