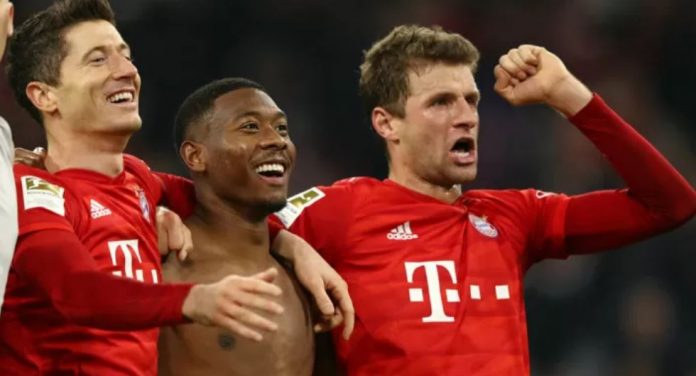 The Bayern Munich legends each made historic contributions as their team swept to victory over Borussia Dortmund and leapfrogged their rivals,National Daily learnt.

Lewandowski opened the scoring and then bagged Bayern’s third, taking his tally to 16 in the first 11 games of the season. In doing so he surpassed the record of Gerd Muller, who netted 15 times in his first 11 matches, 51 years ago.

Sandwiched between Lewandowski’s goals was a Serge Gnabry strike, set up by Thomas Muller which was its own piece of history.

The modern Muller is the first player to record 100 assists in the Bundesliga since Opta started recording such data.

It was the World Cup winner’s fifth assist of the season, one in which he has only started half of Bayern’s Bundesliga games.

He had been linked with a move away from his boyhood club, but has now been involved from the start in their last three matches.

The 4-0 win for Bayern, sealed with a Mats Hummels own goal, sees them move past Dortmund and into third place in the Bundesliga table, one point behind Borussia Monchengladbach, who have a game in hand.

Muller’s nearest rival in terms of laying on goals for his team-mates in the German top flight is another man who played for Bayern.

France international Franck Ribery had 92 assists before he left Bavaria at the end of last season, while third place in the list goes to Gonzalo Castro, who is still playing in Germany but in the second division for Stuttgart.

Behind him is Dortmund’s Marco Reus, who has 62 assists, but, at 30, he’s the same age as Muller, which will make overhauling the Bayern man’s tally a tough proposition.