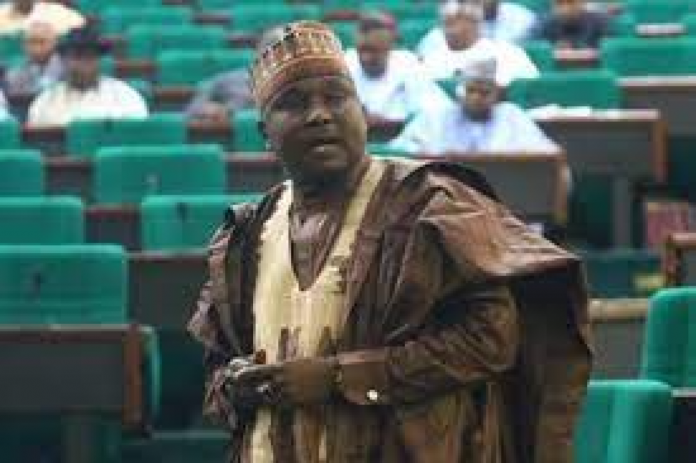 Majority Leader Alhassan Ado-Doguwa has asked the House to consider an amendment to the electoral act as he prepares to add two more children to his brood of 28 so his house can have a poling unit.

Doguwa, the husband of four wives and father of 27, just added one more baby girl, and the house, during the Tuesday session, made light of his promise to keep breeding.

Parading his four wives during his swearing-in in 2019, Doguwa said he had 27 kids, and planned to have more.

A sequel to that began Tuesday when Minority Leader, Ndudi Elumelu, first dropped the gag.

He announced Doguwa just had a new child. That was after Speaker Femi Gbajabiamila asked Doguwa if he had any personal announcement. But the APC lawmaker missed the joke.

“Mr Speaker, mine is to congratulate my brother, the Leader of the House. He currently has 28 children and still counting. He just received double a few days ago. That made it 28. It was 26, now 28,” Elumelu said.

Gbajabiamila then asked him to defend himself.

“Mr Speaker, I didn’t know that you were talking about me,” Doguwa announced.

“It is no longer news because this thing happened in the last 24 hours. It is true that my beloved family had gotten an additional one person, not two like you (Elumelu) said. And it is a baby girl, bouncing.

“The mother and the baby are hale and hearty. The husband is still active; I am here. And I thank God that I kept to my words to the House of Reps; that while I had 27, I promised you that I would continue counting. I want to you to know, by the grace of God and your prayer, that the count will continue. Thank you and God bless Nigeria.”

Doguwa the switched to the Electoral Act amendment.

“I will also – when we get to the floor, perhaps at the Committee of the Whole – appeal to my members so that we suspend the relevant rules; we have a clause in the Electoral Act where it permits families that do have 30 kids in their homes to have an electoral polling unit in that family,”he said.

Gbajabiamila sounded him out again.

“So, Leader, you are working towards (having) a polling unit in your house now that you have 28 children, you have two more to go?”

Responding, Ado-Doguwa said, “Yes, between now and 2023, before the election comes, if you allow that, then I will have a polling unit within my home.”

“Congratulations, Leader of the House,” the Speaker said

“Thank you so much, Mr Speaker. I thank you honourable members. Please, the count still continues.”