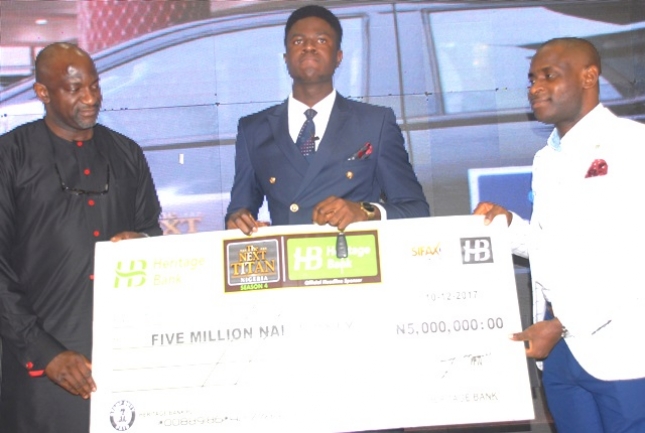 Kennedy is the MD of Blue Leaf Herbs and Spices which is into 100 percent organic cultivation, production and packaging of spices with the objective of reducing importation of spices from outside the country. He is a graduate of microbiology from Godfrey Okoye University, Enugu.

He beat three other contestants at the grand finale of the season 4 of the Next Titan held in Lagos recently to win the star prize of N5 million from Heritage Bank and a brand-new Ford Ranger from Coscharis Motors to kick start his business.

The Next Titan is Nigeria’s entrepreneurial reality TV show, a brain child of Mide Kunle-Akinlaja, where thousands of ambitious young entrepreneurs compete and a winner emerges to cart away with a grand prize of N5 million and a brand-new car to start his or her dream business.

The MD/CEO of Heritage Bank, Mr. Ifie Sekibo said the bank has been sponsoring the Next Titan with other sponsors for the last four years in a bid to harness the youths and instill the spirit of entrepreneurship in them.

Sekibo, who was represented by the Divisional Head, Structured Assets, of the Bank, Mr. Kehinde Olugbemi said Heritage Bank believed in creating, preserving and transferring wealth across generations, adding that if they can teach a couple of people how to catch fish, they will in turn teach others so that wealth can be created, and employment generated.

In an interview with journalists, Mr. Kennedy said, “I can’t express myself right now. I left Enugu to come and pursue this dream and even lost my lectureship job with Godfrey Okoye University while on the programme. This prize means life and everything to me now and it also means that the vision which I have for Nigeria has just begun and waiting to be accomplished.”

Four finalists emerged from the top 16 contestants with the brightest ideas that were shortlisted from 50 aspiring entrepreneurs that were selected from auditions held in Abuja, Port-Harcourt, Enugu and Lagos recently.

The 16 contestants lived together and competed among themselves by carrying out weekly business tasks and challenges around the city of Lagos for nine weeks on television and with weekly evictions in the boardroom by the judges.

Earlier, in his address of welcome, Kunle-Akinlaja, the Executive Producer of the Next Titan Nigeria noted that in the past three years and with the support of the sponsors and judges, they had been able to give out millions of naira and brand-new cars to young entrepreneurs with a deliberate attempt to inspire their spirit of entrepreneurship.

He said besides the contestants, millions of other young aspiring entrepreneurs who are watching the show are also encouraged to see entrepreneurship as a viable career option.