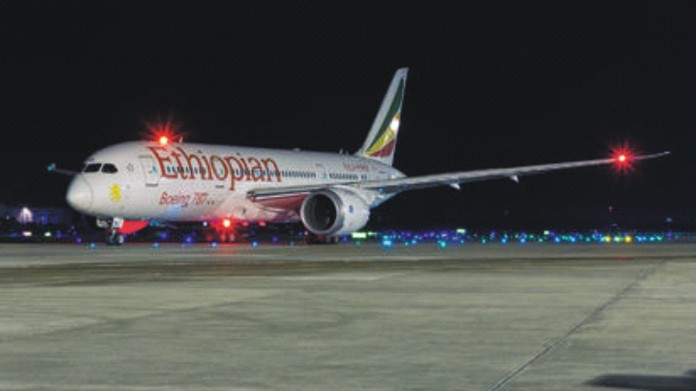 In a move to consolidate the success story and leadership of Ethiopian Airline in Africa, the National Association of Nigerian Travel Agents ( NANTA), which comprises over 1,500 agents, has voted Ethiopian the best airline in Nigeria during their annual general meeting held in Ibadan last week.

The award was presented to the GM Ethiopian Airlines in Nigeria Mr. Solomon Begashaw by the immediate past President of the Association Alhaji Aminu Agoha at its 40th Annual General Meeting which took place at Premier Hotel Ibadan on the 17th of March.

Mr. Begashaw, while thanking the agents and the travelers that made the award possible, promised to further improve on the values that made the Airline stand out.

He announced that travelers to Ethiopia can now get their tourist visas easily through the help of registered tour operators and Travel agents in Nigeria. This was a reiteration of the message he shared in Kano while addressing Kano based travel Agents at the annual Agency Seminar.

Before now, all travelers had to visit the Ethiopian Embassy in Abuja to procure a Tourist visa. As the headquarters of African Union Ethiopia is joining the move by AU to simplify travel within Africa by Africans. The new arrangement will see selected tour operators and Travel agents assist their passengers in approaching the embassy for Tourist visa. This new arrangement will take away one of the obstacles for tourists to Ethiopia. Ethiopia the land of Queen of Sheba is home to the largest number of UNESCO heritage sites in Africa.

Ethiopian Airlines was founded in December 21, 1945 but started operation on April 08, 1946. It operates its Major Hub at Addis Ababa a Second Hub in Togo, Lome and a Third Hub at Lilongwe, Malawi. The Ownership is by Government of Ethiopia (100%) and the Chief Executive Officer is Mr. Tewolde GebreMariam.

Ethiopian Airlines started its flight to Kano in 2014 but has been flying to Nigeria since 1960. Today, the airline flies to Lagos, Abuja and Enugu.

The airline is currently the fastest growing airline in Africa. And in its close to seven decades of operation, Ethiopian has become one of the continent’s leading carriers, unrivaled in efficiency and operational success. It has a very large fleet of aircraft that cut across all series of Boeing and Bombardier. It also commands the lion share of the pan-African passenger and cargo network, operating the youngest and most modern fleet to more than 90 international destinations across five continents.