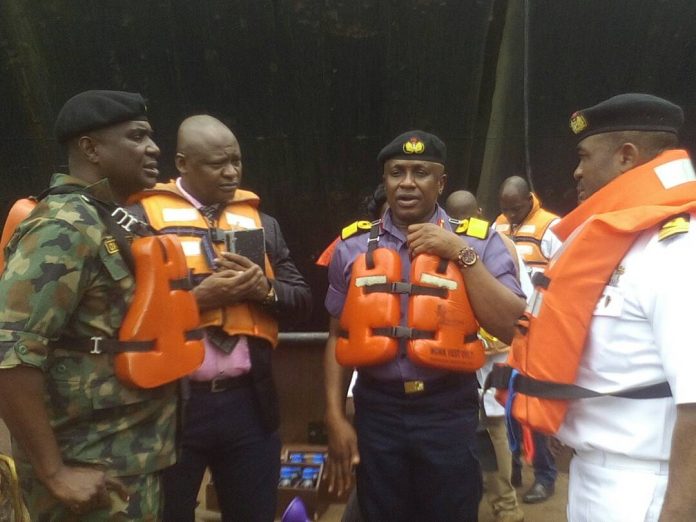 Share this on WhatsApp
Spread the love
By OKOSUN DENNIS
The Nigerian Navy on Wednesday in Lagos handed over two vessels arrested with their 14 crew members  to the Economic Financial and Crime Commission (EFCC) for further investigation and prosecution.
The Flag Officer Commanding (FOC), Western Naval Command (WNC), Rear Admiral Sylvanus Abbah, who did the handing over  said the force would not tolerate any infractions on Nigerian territorial waters.
Admiral Abbah reiterated the Chief of Naval Staff, Vice Admiral Ibok Ibas directive to rid Nigeria’s maritime environment of criminalities, noting that personnel of the WNC arrested the vessels while on routine patrol.
National Daily learnt that the two arrested vessels, MV SHIRLEY and MT VINE were  laden with suspected stolen petroleum products.
MV SHIRLEY and her eight crew members were said to have been arrested on April 19 about 6:00 pm at Lagos anchorage for allegedly dealing in petroleum products.
Admiral Abbah said “The vessel was laden with about 145 metric tons (MT) of AGO without valid documents for carrying petroleum products on Nigerian waters.
ALSO SEE: Navy assures of secured territorial waters

“Samples of the products were taken for laboratory test to ascertain its quality which the test result did not meet the Department of Petroleum Resources (DPR) and Standard Organization of Nigeria’s (SON) specification which indicated the products was illegally refined.”
The FOC said MT VINE was also arrested on June 9, on arrival at SB BAKARE Jetty, Kirikiri in Lagos to discharge products.
“During the arrest, it was observed that the flash point of the product was higher than that specified by DPR and SON.
“Moreso, the colour of the product was off DPR standard as indicated by the laboratory analysis.
“The haulage of the vessel was carried out and it was discovered that the vessel was carrying about 600MT of AGO against the 400MT quantity authorised,” he said.
Abbah warned everyone who has the intention to commit crime to relocate or face the brunt. “The navy in its renewed efforts to curb maritime domain of illegalities would not tolerate any fraudulent activities in the nations maritime environment.
“The command has zero tolerance for every form of criminality in its area of responsibility and advise defaulters to desist from such act or face the wrath if the law,” Abbah warned.
The two vessels alongside the crew members were handed over to the EFCC for further investigation and prosecution.
Share this on WhatsApp