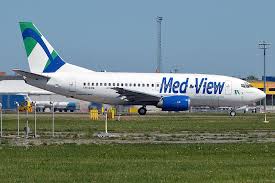 National Daily gathered that the NCAA frowns at the company’s shutdown of scheduled operation for about three months due to Medview’s aircraft continuous stay at a maintenance facility.

According to a worker at Medview, NCAA planned to withdraw the license on November 10, but NCAA spokesperson, Sam Adurogboye, said Medview has till the end of November.

NCAA downgraded the operation of Medview Airline to non-scheduled operations in line with the provisions of the civil aviation regulation and it has directed Medview to begin chartered operation before November ending to avoid losing its Air Operating Certificate.

The downgrade was a last resort to keep Medview in operation until it gets back to its feet. Medview is unable to operate schedule operation due to the number of aircraft available for flight. Schedule operation requires at least two planes, while non-scheduled operations require just one.

“The position of NCAA on Med-View is they should ensure that they start using their AOC for charter operations only between now and November ending. Failure to which their AOC will lapse in line with the provisions of Nig. CARs,” Adurogboye said.

According to a worker, there seems to be no hope for Medview as no one understands the managerial decision of Bankole. And this has led to some workers exiting the company, “Despite efforts by the management, there is no hope on the horizon.

“We learnt that the NCAA will withdraw the licence by November 10. Everyone is afraid. I know some colleagues that had simply sought new jobs and moved on. Even me, I have been submitting my résumé for jobs lately. Nobody seems to understand what the CEO is doing with the airline.”

Share this on WhatsApp
Related Topics:Medview AirlinesNigerian Civil Aviation Authority (NCAA)
Up Next