The Chief Executive of Financial Derivatives Company Ltd, Bismarck Rewane, says the country should be expecting some critical times ahead unless the federal government put in place urgent policy measures as the country’s economic performance in Q2 was lackluster.

Speaking on a monitored programme on CNBC Africa, he disclosed that while he did not expect anything more from the performance of the Nigerian economy in the second quarter, it shows the presence of a recessionary gap, which means the economy is growing below its potential.

“To be disappointed is to have expected more than what happened, but it’s still lacklustre. It confirms the existence of a recessionary gap, because potential GDP is higher than real GDP. It also shows the potential problem of a growing population rate of 2.7% as against 1.94%.

“From agriculture which dropped from 3.17% to 1.79%, slowing, to manufacturing to trade and real estate. Trade (wholesale and retail) employs over 18% of Nigeria’s population.

“Real Estate after three years of languishing came out in Q1 positive, and has now dropped all the way to -3.24. That is a killer.”

“What is more interesting is, if FBN PMI is a valid predictor of output, it went down from 56 points in April to 50.9 in May, to 49.9 in June. Meanwhile, in these three months, the central bank’s PMI went in the other direction. So, there is a question about data integrity.

When asked if the CBN policy to force Deposit Money Banks (DMBs) to redirect loans to the real sector requires time to materialise, Rewane snapped;

“We are not getting enough investment, both domestic and international. Trying to substitute fiscal solutions with monetary interventions, those are bound heads, palliatives, they go nowhere.

“You can’t fake prosperity, you either have prosperity and the opposite is a hardship. We have enough challenges as it were, we were not going to substitute fiscal interventions to monetary interventions.

Meanwhile, Rewane stated that the Q2 GDP was not entirely bad as several other factors must have been responsible for the slow growth recorded.

According to Rewane, “even though it is 1.94%, this is the highest quarterly growth in the last three years. So, compared to in terms of seasonality. Also, this is the Q2 in which there was no cabinet, post-election blues, planting seasons. IMF has revised its GDP projection to 2.3%. So it means for Nigeria to attain that, we need to chunk out GDP growth around 2.4% in the next two quarters. If we actually disappoint in Q3, then we are done.” 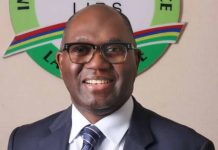