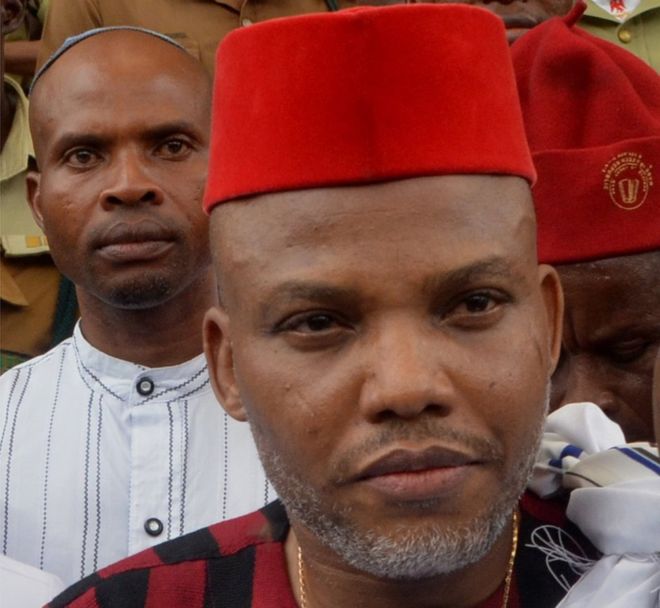 The leader of the Indigenous People of Biafra (IPOB), Nnamdi Kanu, from his unknown hiding place, reiterated that he never said that President Muhammadu Buhari was cloned. The IPOB leader insisted that his message to the world has always been that President Buhari was ‘dead’ and was replaced by another individual, Jubril Aminu Al-Sudani, as a double.
Kanu was said to have made the clarification at the weekend in a two-and-half hour worldwide radio purported broadcast from Israel.
President Buhari had at the weekend in Poland stated that he is the real Buhari and not cloned.
It will be recalled that the Minister of Information and Culture, Alhaji Lai Mohammed, had generated fresh public curiousity in his argument that it is ‘idiotic’ to contemplate that the President was cloned while President Buhari, himself, on Sunday told the Nigerian community in Poland that he was the real person and not a clone.
Kanu, however, countered that minister, stating that the introduction of ‘cloning’ into the narrative was a diversionary attempt to confuse the people.
Kanu was said to have declared: “We are going to dismantle the lies of Lai Mohammed and his brother (Senator Ajayi Borroffice), who claims he holds a doctorate degree in genetics and said nobody can clone a 75-year-old.
“Lai Mohammed re-echoed that sentiment. If you’re not intelligent enough, you will think that Nnamdi Kanu said Buhari was cloned into Jubril (a Sudanese).
“That was not what I said. I said Jubril is an impostor. They (the cabal) brought him in to act and behave like the ‘dead’ Buhari. I never said he was cloned.
“The introduction of cloning into the narrative was a ploy to confuse the people.
“I am very grateful that the Sudanese government is doing something about this by investigating the matter.
“It must be mentioned that the mastermind of the fraud of Jibril is Abba Kyari. Has anyone seen him recently?
“Osinbajo is a coward that is why he is not President. Dora Akunyili sacrificed her life that Jonathan may become president. Without what she did, nobody had the mettle to speak the truth.
“Akunyili came and told everybody the truth that Yar’Adua was dead. What they (the cabal) are doing now was perfected then.”