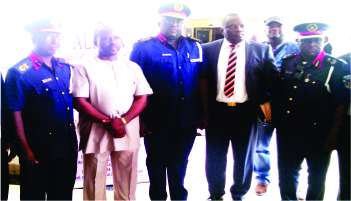 THE Association of Licensed Private Security Practitioners of Nigeria (ALPSPN) has expressed its determination to fight the charlatans among its practitioners and make the industry more professional by imbibing sound ethics and standards.
It further stated that it would engage the regulators more to identify with their problem with a view to resolving them for greater efficiency.
The Chairman, Lagos State Zone of ALPSPN, Barr Wilson Esangbedo said this during the 2015 Security Stakeholders Summit held at the Eko Hotels and Suities, Lagos.
He explained that there was the need for practitioners to stick to laid down ethics as members are owed huge amount of moneys by clients.
He called for a special training for private security guards to enable them make their input in the fight against insurgency in the country. While admonishing clients not to patronise illegal companies that are not registered, added that Nigerians who act as proxies to foreign companies to flout the rules and regulations should desist from it.
The Commandant General of Nigeria Security and Civil Defence Corps (NSCDC) Mr Muhammadu Abdulahi Gana, who was represented by Dr N.I Nwinyi, Acting Commandant General in charge of Operations, said as the regulator of the industry, they need the collaboration of ALPSPN to fish out those undercutting their business.
He disclosed that they have arrested 77 fake and unregistered private security companies in 2015. “When we shut them down, we ensure that they are not in business and we follow it up. It is an on-going process until we clean the industry and leave it for registered companies,” he said.
However, the National President ALPSPN, Mr Akhimien Davidson said, “We cannot depend on the public security agencies alone especially in this time of insurgency in the northeast. They are hard pressed for men, equipment and materials in the prosecution of this war. The private security companies can come in the area of mopping up operations. Recently Internally Displaced Persons (IDP) centre was bombed. The private security can used in the area of surveillance and monitoring of IDP centres.”
Expatiating on his paper “Regulation and Standards in Industrial Security,” he called for security reforms in Nigeria to reposition it for better performance. He, however, frowned at a system where some private security guards cannot speak good English or dress properly, noting that such weaknesses hamper training.
The CEO, Lagos State Security Trust Fund, Fola Arthur Worrey expressed bitterness over the poor investment and funding of the security architecture in the country. He pointed out that the over reliance on donations and trust fund to provide basic equipment and other logistics for public security agencies was unfortunate and it affects performance.
Speaking on “Funding and Management challenges in the security sector”, Worrey explained that in the last seven years in charge of Lagos State Security Trust Fund, they donated 882 vehicles and N3.2 billion to support the police and the military. Out of the vehicles, 600 were donated to the police alone while the Federal Government provided them only 30 vehicles during the same period.
“As a result of inadequate funding, we are placing ourselves constantly in a state of crisis as a people. You only have vigilante group where state security apparatuses have failed. It is a shame that Boko Haram could seize territories because we failed to fund security agencies appropriately,” he said.
While calling for inter-agency cooperation to fight security challenges, the Lagos state Commandant, (NSCDC) Mr Ayodele Abafi,  pointed out that robust collaboration and intelligence gathering among security agencies would enhance the nipping in the bud of the spate of insecurity.