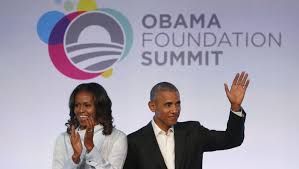 Share this on WhatsApp
Spread the love
The Obama Foundation will be launching a new international addition to its programme in July.
The Obama Foundation Leaders Program: Africa will be unveiled in South Africa by Bernadette Meehan, new Chief International Officer, in a five-day convention starting from July 14.
President Barack Obama will be guesting in.
This one-year leadership development and civic engagement program will train and support 200 promising young leaders across working in government, civil society, and the private sector across Africa.
The July summit will feature plenary sessions, problem-solving workshops, and technical trainings that will help these young emerging leaders drive positive change throughout Africa.
There will also be a town hall meeting with President Obama where he will hear about their experiences and the work they’re doing.
Thereafter, the leaders will remain connected to the Foundation and one another via an online platform where they will engage in topical discussions, access leadership and training resources, and participate in trainings and webinars led by experts and industry leaders.
The programme will serve as the backbone of a larger ecosystem of Foundation changemakers across the continent and, eventually, the world, as the Foundation launches similar leadership programs in regions around the world.
“The Obama Foundation Leaders Program: Africa represents our largest and most ambitious international program to date,” said Meehan while announcing the latest programme in Chicago on Monday.
“In bringing together 200 young leaders from across Africa, we hope to begin a conversation about how each of us can create positive change in our communities.”
The Obama Foundation has a bouquet of programmes for young and promising people in Africa and around the world.
This includes training days around the United States, an inaugural global Summit in Chicago, and events with emerging leaders in Brazil, Germany, Indonesia, India, Singapore, and New Zealand.
The Foundation has also partnered with the University of Chicago Harris School of Public Policy to create the Obama Foundation Scholars Program.
This group of rising young leaders from around the world will come to Chicago to earn a Master of Arts degree focused on International Development and Policy while also improving on what they’re doing in their communities .
It recently announced its first class of Fellows — 20 outstanding civic innovators from 11 different countries and five regions.
This two-year, nonresidential program will kick off by bringing the Fellows together for their first convening in Chicago next month.
Last year, the Foundation received nearly 10,000 applications for 200 slots.
Share this on WhatsApp
Related Topics:Obama Foundation
Up Next