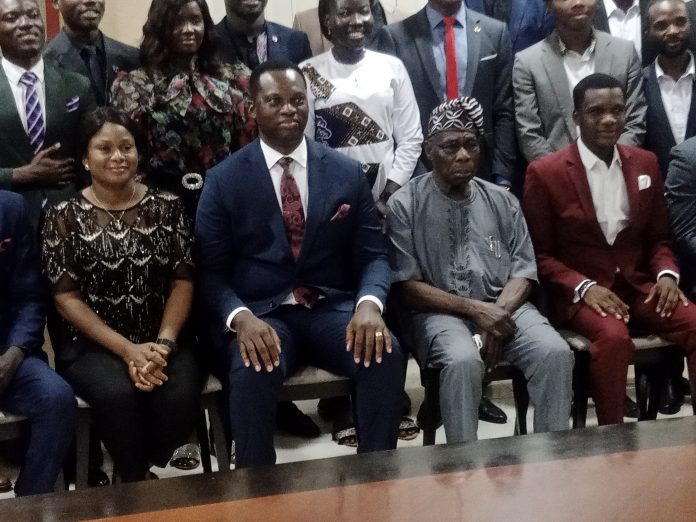 Former President Olusegun Obasanjo has charged the 2021 winners of the Future Africa Leadership Awards (FALA) to be a worthy Ambassador of the African youths and the continent at large in the world.

Chief Obasanjo who gave the charge while he hosted both current winners and past winners of the award at his Obasanjo Library in Abeokuta, charged the youths to make good use of the opportunities afforded them by Chris Oyakhilome Foundation, and also let the world know that they’re now a beacon of Africa’s ingenuity and determination.

Recall that Obasanjo was the Chairman of the event held at the Chris Embassy auditorium during the crossover night when Cameroonian Nervis Nzometiah Tetsop emerged the star prize winner of $25,000 for 2021 coveted award.

Former President Goodluck Jonathan, and former ambassador and representative of the African Union to the United Nations, Dr. Arikana Chihombori-Quao also attended the event as Special Guest of Honours.

“If you have won a FALA award put in place by Man of Vision, Rev. (Dr.) Chris Oyakhilome, it doesn’t make you the best on the continent because there’re a lot of other youths in Africa who can do more, but don’t have the opportunity.

You’ve been given the opportunity, and it was not by a mistake, but rather an act of God for you to mentor other people, and who in turn would do the same in their communities.

Obasanjo also enjoined the youths to imbibe the virtue of humility, stressing that the savior of the world, Jesus Christ while he was on earth lived a life of humility.

“In my whole life, I have come to know that humility is key in our interaction with other people, whether you’re a politician, banker or lawyer or an elder statesman, humility will open more doors for us.

The former president who recounted his time in prison told the FALA award winners that when he was arrested, he thought it was a mistake. He however came to terms with the fact that the power that was at the time wanted him behind bars at all cost.

While in prison, I wanted to read law, but I was denied that opportunity by the authority at that time. But I was not discouraged, and instead turned to the bible. And in the bible, I found absolute peace.

“So, I want to charge you all to be mindful of your beginning after being pushed into the limelight as being among celebrated youths on the face of the African continent. Be focused, steadfast in all your dealings, but most importantly be humble no matter where God has placed you,” he added.

He advised the youths to always be in touch with each other in order to further mentor each other to develop their communities.

Obasanjo in his remarks also appreciated Rev. Dr. Chris Oyakhilome for his immense contribution to the development, empowerment and mentorship of African Youths to make them a life saver in their various communities.

“Rev Oyakhilome is a man of Grace, living a life of purpose. I have no doubt in my own mind that the purpose of God creating each and every one on earth is to make a difference wherever we may be. Chris Oyakhilome has made a great difference.

In his remark, Editor-in-Chief/Managing Director of Paradigm Communications, publisher of National Daily Newspaper and National Standard Magazine, Deacon Sylvester Ebodaghe who led the delegation, thanked the former president for allowing the youths to tap from his immense wisdom.

He said President and founder Loverworld incorporated also known as Christ Embassy, Pastor Chris Oyakhilome instructed him to bring the youths down to Abeokuta to tap from his immense wisdom before returning to their various countries.

According to him, Chief Obasanjo is not just a father to Nigeria and Africa, but a global figure who has played host to world leaders seeking to tap from his immense wisdom.