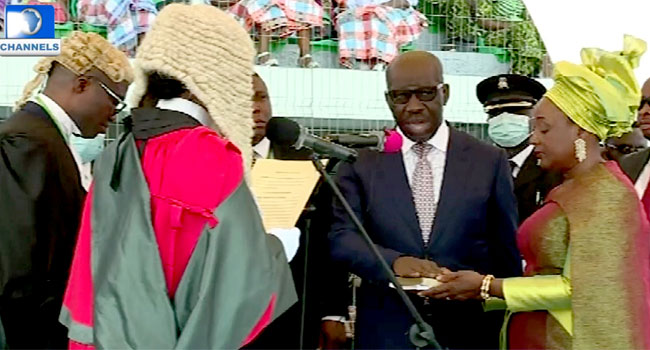 Governor Godwin Obaseki of Edo State on his inauguration for second tenure in office on Thursday promised to consolidate the confidence of the people of the state on democracy and the hope for a better tomorrow. The governor commended the people of Edo State that their decision on September 19 to return him for a second tenure was a demonstration of restoration of confidence in the country’s democracy. He added that the massive support for his victory reflected the people’s triumph in democracy.

Governor Obaseki had declared: “What you, my dear people of Edo State, achieved on September 19 is the restoration of confidence in democracy and its institutions.

“We have become a point of reference on how the will of the people can triumph in a democracy that functions properly.

“My reelection represents new hope. I see myself as a vessel in the redefinition of democracy in Nigeria and I am not unaware of the enormous responsibility this victory places on me.”

Obaseki stated that all the election frictions have come to passed, saying that it is time to heal the wounds and move forward as one family to make Edo State great again. The said that Edo is open to contributions of every resident in the state. He revealed readiness to work with political opponents in the September 19 Edo governorship election.

“It is time to heal. We are kith and kin with a common destiny. Let us stop dwelling in the past.

“It is time to take our common destiny in our hands and commence the odious task of making Edo great again,” Obaseki said.

Obaseki thanked the leadership and members of the Peoples Democratic Party (PDP) and Edo people for their support that made him victorious for the second tenure. He promised to improve on his performance and deliver the dividends of democratic to the people.

He reiterated his commitment to revamp the economy, tackle unemployment through development of agriculture, and deliver quality education and healthcare to residents of Edo State.

“I am encouraged by the trust you have bestowed on us and grateful for your belief in my leadership and my capacity to continue piloting the affairs of this great state,” he said.

Obaseki defeated Pastor Osagie Ize-Iyamu, candidate of the All Progressives Congress (APC) in the September 19 governorship election in Edo State on the platform of the PDP. Governor Obaseki had 307,955 total votes, while the main challenger, Ize-Iyamu, had 223, 619 votes. Fourteen political parties and their candidates participated in the election.

The Independent National Electoral Commission (INEC) INEC Returning Officer, Professor Rem-Rukeh, Vice-Chancellor of the University of Petroleum Resources, after the collation of results from the various local governments, had announced: “That Godwin Obaseki of PDP having satisfied the requirements of the law in meeting the 25 per cent in two-third of the local government areas in the state and having a margin of lead higher than the cancelled votes is hereby declared the winner and returned elected.”

Governor Obaseki reiterated that he will not discriminate or neglect anybody in the state. He said that if he discovers former APC National Chairman, Adams Oshiomhole, has anything positive to contribute to the development of the state, he will not hold back in reaching out to the former Edo governor.