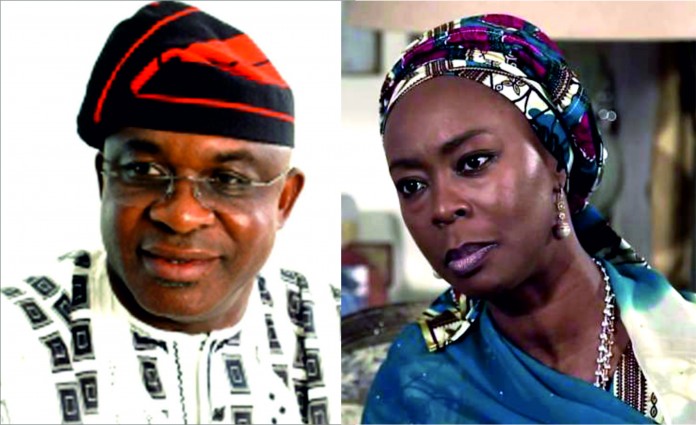 The global one percenters worry more about their women than the taxmen they dodge. And Nigeria’s No. 3 couples #Panama Papers just uncovered are no exception

As far as stashing wealth goes, Sen. President Bukola Saraki, his predecessor Sen. David Mark, and eight other Nigerians have stacked up enough. And they are condemned to live in the lap of luxury for the rest of their lives. The President Muhammadu Buhari anti-graft shadowboxing, for now, is no threat. But their better halves are.

#PanamaPapers, history’s biggest kick-ass investigative journalism project, has been uncovering the monkey business of these well-heeled Nigerians. The German newspaper Süddeutsche Zeitung and the International Consortium of Investigative Journalism (ICIJ) on the project wouldn’t just stop at digging out the hidden assets of these public servants and deep pockets; the muckrakers have also lifted the veil on the bedroom contracts of five of these offshore-rich and powerful. Some of them are ruptured. Others are riddled with fault lines.

For many of those women that married money, as recorded in law firm Mossac Fonseca’s database the journalists dissected, the tales have not been exactly lovey-dovey.

Ask Victoria, 61, one of the six wives of Nigeria’s former Sen. President David Mark. Their romance flamed out 16 years ago. And she was able to get a London family court to freeze millions of pounds of Mark’s cash stashed in four tax havens then.

And hear what Toyin Saraki, the wife of Nigeria’s No. 3 citizen, is not saying in her public contradiction of her husband’s statement. In the wake of the #Panama Papers, Saraki said Sandon Development Ltd, one of the hidden assets traced to him, was Toyin’s. He insisted his wife inherited it and a lot more fortunes from her rich and famous parents—the Ojoras.

The tiff between the couple is not threatening yet. Toyin, still carrying Cupid’s arrow in her heart, appears to have cast in her lot with Bukola.

But that’s for now. Over the long haul, something of a hex rears up in family wealth gathered offshore. And it tends to scatter the nest eggs. Each former lovebird, now red in tooth and claw, scrambles for whatever chunks are up for grabs.

And almost always, such soured love worsened by fights over offshore assets remains the heartache of the global one-percenters—a handful who Oxfam says have cornered half of the world’s wealth. Hiding assets abroad is not the problem. What’s at issue is the intention: tax dodging. The figures aren’t uniform, though, the amounts lost to tax evasion are staggering. Gabriel Zucman, economist and author of The Hidden Wealth of Nations, said $7.6 trillion is lost in tax evasion by the super-rich around the world. A 2012 study by James Henry, McKinsey’s former chief economist, put the figure of taxes evaded globally at $21 trillion. And governments around the world spend $200 billion annually chasing the fraudsters in a cop-and-robber kind of game. Which is not easy. “It is taking very long and Nigerians are becoming impatient,” President Muhammadu Buhari said recently. Strangely, the conjugal pact used in amasssing this offshore wealth makes its recovery—or revelations—less tasking.

And here goes the ICIJ roll call of marriages offshore wealth has split down the middle: Clive Joy-Morancho and his wife Nicola in Zimbabwe; Antonio Ibarcena Amico and Marcela Dworzak in Peru; Russia’s ex-President Dmitri Rybolovlev and Elena; and Scot Young and Michelle in Britain.

Wives fighting for slabs of their exes’ offshore wealth have almost spawned an industry of sorts. Lawyers, investigators, and risk experts now specialise in divorce and hidden assets. There’s even an NGO that offers wives a shoulder to cry on. The First Wives, for instance, was founded in 2014 by Michelle. It’s been helping divorcees trace their “narcissist” husbands’ assets hidden by Mossac Fonseca in 10 most active tax havens all over the world.

The First Wives is now God’s gift to Nigerian wives whose marriages have bombed, and are ready for divorce. But at the time Victoria was fighting her own battle with Sen. Mark, the only help available was the court.

Poor woman! When their romance was sizzling, back then, Victoria doubled as Mark’s bedmate and financial mule. He was an army general then, a rich one at that, thanks to a telecommunications contract he allegedly handled, creatively, when he was minister under former President Ibrahim Badmos Babangida.

He had salted his loot away on the Island of Man and Jersey, in four accounts, using a shell company Lincoln Trust Company Jersey Ltd. About £6 million pounds were found in those accounts, according to a 2006 (U.K.) Appeal Court document Sahara Reporters quoted. While squirrelling the monies, the Marks had their cover story: the monies were meant for their children’s school fees and other expenses in the U.K. And it worked fine—and as long as their love lasted.

Saraki and Toyin were slicker, however.  They registered four shell companies—Sandon Development Limited; Girol Properties Ltd; Landfield Ltd; and Longmeadow Holdings—in Seychelles Island, the British Virgin Island, and Jersey. And Toyin, who is less politically exposed, was made major shareholder and director in the companies.  It was a makeshift arrangement, between 2004, when Saraki was Kwara’s governor, and 2015, probably to shake-off anybody following their trail. He began taking over from his wife in January 2015.

A memo recovered by ICIJ revealed how crooked the takeover was. “It was noted there had been on-going negotiations and discussions between Dr. Bukola Saraki, Oluwatoyin Saraki, and Longmeadow Holdings Ltd, a company registered in Jersey,” the minute of the takeover meeting stated in part. And the bottomline was:” The transfer of the entire issued shares of the company from [Landfield] from Oluwatoyin Saraki to the buyer [Bukola Saraki] for the purchase price of £3 million.”

The Senate president now has hijacked Landfield and Sandon from his wife and front Toyin. Landfield’s takeover was official (in the Panama way) and less disputed—at least in public. But the awesome twosome might have mismanaged the bad blood the takeover of Sandon created. Toyin’s lawyers appear to be turning the table by insisting their client alone owns the company.

While the Sarakis relish stocking up pricey estate pieces as assets, others of the rich families have their choices.  Sen. Mark likes keeping his in hard currencies. The Joy Moranchos were car freaks. As of 2014 when their divorce settlement was to be decided, the aviation businessman had a 35-car collection, including a Bentley, a Ferrari, an Alpha Romeo, and a McLarens. Rybolovlev is an art collector with paintings like Picasso’s Van Gogh’s, and others’ worth $650 million bought through his shell company Xitrans Finance Ltd. He has other assets worth more, though. Young had a knack for estate collection, too.

Unlike Toyin, many of the First Wives don’t know much about the onion route their husbands take to hide their wealth offshore. It’s when divorce is certain the wives then begin to agitate for settlements. And it’s not always easy then, “It’s a blood sport,” Michelle, founder of First Wives, told the ICIJ. “Unless you’ve got the funds, you’re dead and buried.” According to Washington-based divorce lawyer Sanford K. Ain, Elena spent between $2 million to $3 million to track Rybolovlev’s assets in 2014.

But the effort was worth it for some of the wives. Victoria was able to freeze £6 million of Nigeria’s former Senate president’s monies in British banks.   Elena, in 2013, got $4.1 billion as her slice of her husband’s wealth. But an appeal court in Switzerland pruned it down to $600 million in 2014. Michelle sliced $32 million from Young, who later took a jump and died. Nichola Joy Morancho was awarded $180,000 annually until the court will decide her $40 million play for Joy Morancho’s assets.

Toyin isn’t seeking anything yet. And she may not kick up a stink for as long as her decades-long romance with Saraki blazes. Except if good old Murphy’s law kicks in.