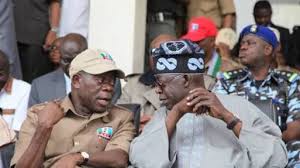 While he called on the national leader of the APC, Senator Bola Tinubu to learn from Okorocha’s experience, Omokri said the alleged fate that befell the Imo State governor is awaiting the national chairman of the party, Adams Oshiomhole, and Minister of Transportation, Rotimi Amaechi.

He stated this in a post on his twitter handle apparently in response to Okorocha’s current political travails.

He wrote, “Tinubu, learn from Okorocha’s fate. After using him till he could be used no more, @MBuhari and @OfficialAPCNg have now thrown Rochas away like a used sanitary pad.

“The same fate awaits Oshiomhole and Amaechi. Mark my words. They are being TOLERATED, not CELEBRATED.”

Not only did Governor Okorocha’s determination to install his son-in-law as his successor in Imo crash during the recently concluded general elections, his senatorial ambition has also come under threat despite being declared winner of Imo West senatorial district election.

The Independent National Electoral Commission (INEC) has refused to give Okorocha certificate of return on the claim that its electoral officer declared him winner under duress.

APC, which has since suspended the governor, only recently said the party will have nothing to do with Okorocha’s travails.