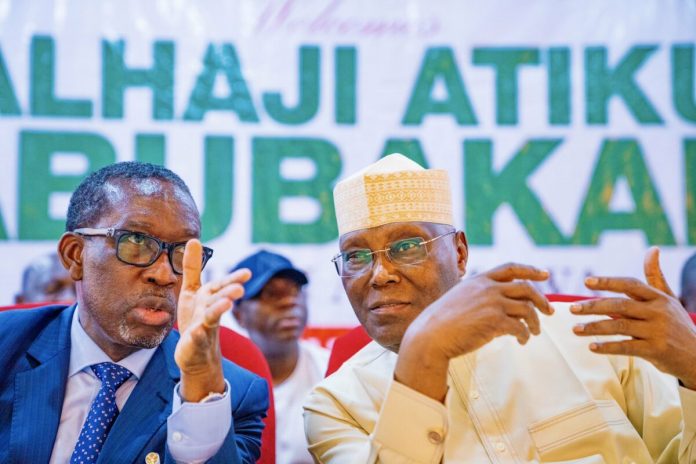 How else can anyone describe the outburst by some self-acclaimed regional leaders describing Governor Ifeanyi Okowa’s emergence as the running mate to the PDP presidential candidate for the 2023 election, Atiku Abubakar if not to say it was an expression of unfeigned mindset of self-centred and dubious clannish men?

Since Okowa’s emergence as Atiku’s running mate on Thursday, June 16, 2022, mixed feelings have been expressed by various quarters for different reasons most of which bordered heavily on parochial ethnic bias against Okowa’s nativity.

In a statement signed by a group christened Southern and Middle Belt Leaders’ Forum (SMBLF), a conglomeration of Pan Niger Delta Elders Forum (PANDEF), Afenifer (the pan Yoruba group), Middle Belt Forum, Ohaneze Ndigbo Worldwide, the association said “it was unspeakable and quite disappointing that Okowa, who is currently Chairman of the South-South Governors’ Forum, and a native of Owa-Alero in Ika North-East Local Government Area (one of the Igbo-speaking areas) of Delta State, would exhibit such barefaced unreliability.”

Describing the acceptance by Okowa to serve as a running mate to the PDP’s presidential candidate “as treachery and a betrayal to the south,” the leaders of the coalition believe “Okowa’s action was unspeakable and disappointing especially as he currently serves as the chairman of the South-South Governor’s Forum and a native of Anioma, an Igbo-speaking area of Delta state.”

Without mincing words, the accusation by SMBLF that Okowa is a traitor for accepting to be the running mate of Atiku, is baseless, uncalled for and obviously being canvassed in insincerity and dubious intentions to ridicule his nativity and the entire Igbo nation.

How could anybody say “Okowa’s action is tantamount to a despicable pawning of the political future of the people of Southern Nigeria?” At the last count, how many southern candidates both of the APC and PDP contested for the presidential tickets of both parties and how many schemed unsuccessfully to plug into the ticket as the running mate to the northern candidate, Atiku Abubakar?

Those who know will agree that even the emergence of a northern candidate, Atiku, as the PDP presidential candidate couldn’t have been possible if not for the massive support and full ownership of the project by southern governors and politicians more than even the support he got from the north. So who is fooling who?

It was obvious that these same self-acclaimed leaders were resolved at not ever allowing a strong contender both on the PDP and APC platforms emerge from the South East. So they were taken by surprise when a very strong, well qualified, and credible candidate of the Igbo stock emerged as the running mate to the PDP presidential candidate.

What makes Okowa’s case different from Nyesom Wike and Emmanuel Udom’s aspirations to also pair as the party’s flagbearer’s running? Up till today, none of these so called leaders have used the term “traitor” or “treachery” to describe any of these people even though they were all part of the selection process for the office of the vice president and which Okowa emerged the preferred candidate. You see where the deceit lies?

The Delta state governor is a traitor but the other two candidates (of the PDP) nominated alongside with him for consideration for the position of the running mate to the party’s flagbearer at the same hall, same event, are not, abi?

Could the Southern and Middle Belt leaders have said this if Wike or Udom, who were also recommended, had been chosen instead of Okowa?

Without mincing words, it is crystal clear that contrary to the allegation of the self-acclaimed leaders of the South and Middle Belt, they (the leaders) in actual sense are the real betrayers.

From their serially displayed demeanour, the leadership of the SMBLF rather than working for the good of the ordinary citizens in their coveted catchments are only interested in pushing their selfish interests which they usually tag as the position of the region.

Apart from press statements how do Ohaneze, PANDEF, and the rest interact with the major constituents of Southern Nigeria?

To the Southern governors/politicians and the entire leadership and membership of the Southern and Middle Belt Forum, did it ever occurred to them that there is a zone that has never been given the opportunity to occupy the coveted seat of the President of the Federal Republic since this dispensation?

Where do they have in mind as the best suited zone to be supported to clinch the presidential ticket both in APC and PDP when they were marshalling out ( that’s if they actually did) their power rotation agenda? Couldn’t it have been an emphatic ceding of the slots in the two major parties to the South East for equity since it is the only zone in southern Nigeria yet to take a shot at the presidency?

So according to the leaders, power must return to Southern Nigeria but should never be allowed to go to South East, abi? Any Igbo man buying the deceit of these neighbours from South West and even parts of South South is an outright iberi ibe walahi!

Where is southern Nigeria as a political entity? Truth be told what we have as far as on ground is Southwest, Southeast and Midwest geopolitical creations.

Now the Southwest produced Olusegun Obasanjo who reigned for 8 years (1999-2007) and Yemi Osibanjo for another 8 years as Buhari’s vice president from 2015-2023. The South South produced Goodluck Jonathan who stayed for 6 years before the uprising against him in 2015.

If our so called leaders were to be honest or rather sincere with themselves they could have discouraged the band of aspirants in the two major parties and narrowed it to the east  if we are to talk of equity and justice. What stopped the so called southern and middle belt leaders from insisting on balancing the injustice to the South Eastern zone of the conscription called southern Nigeria by mounting pressure on politicians from the region to step down and help work to produce credible candidates from the South East?

So there’s no difficulty calculating how much the self-acclaimed Southern and Middle Belt Forum leaders believe in this campaign; in this clamour for power to shift to the South and rightly to the Southeast for equity and fairness. God bless Nigeria!