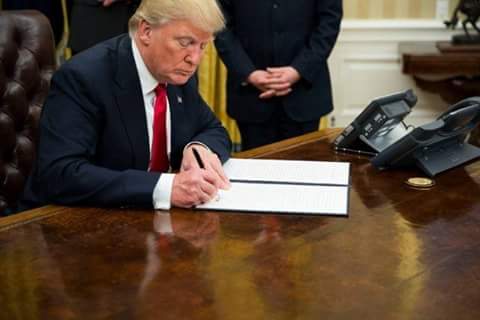 More than a million people have signed an online petition calling for US President Donald Trump’s planned state visit to Britain to be cancelled to avoid embarrassing Queen Elizabeth II.

The petition was created before Mr Trump barred Syrian refugees and suspended travel from seven Muslim-majority countries, but after he signed the inflammatory executive order which sparked protests across the US, it gained almost immediate traction.

The number of signatures continued to rise rapidly, in a grassroots backlash against Mr Trump’s immigration policies.

But British Prime Minister Theresa May’s office shut down the idea of a cancellation, saying the visit would go ahead as planned.

The invitation to make a state visit, which will involve lavish displays of royal pageantry and a banquet hosted by the monarch, was conveyed by Ms May when she visited Mr Trump last week.

The petition, created by Leeds man Graham Guest, asserted that such a visit would “cause embarrassment” to the Queen.

“Donald Trump should be allowed to enter the UK in his capacity as head of the US Government, but he should not be invited to make an official state visit,” the petition reads.

“Donald Trump’s well-documented misogyny and vulgarity disqualifies him from being received by Her Majesty the Queen or the Prince of Wales.

“Therefore, during the term of his presidency Donald Trump should not be invited to the United Kingdom for an official state visit.”

“It’s added a new dimension to things and until that ban is lifted I don’t think he should come to the country at all in any capacity,” he said.

The anti Trump petition has become the second most popular petition ever on the parliamentary website, after one calling for a second referendum on membership of the European Union drew over four million signatures last year.

Once a petition passes 100,000 signatures, politicians must consider it for debate, and although such debates were largely symbolic and rarely affected government policy, this particular one would potentially be embarrassing for Ms May.

Her Downing Street office said “An invitation has been extended and accepted” but declined to comment any further.

A year ago, parliament debated a petition calling for Mr Trump, then the Republican candidate, to be barred from the UK.

It gathered close to 600,000 signatures before it was closed last June.

Some politicians from the governing Conservative Party and opposition Labour Party have criticised Mr Trump’s immigration order, with Labour leader Jeremy Corbyn saying the state visit should be put on hold.

Share this on WhatsApp
Related Topics:BritainPetitionQueen Elizabeth IIUS President Donald Trump
Up Next

Basketmouth wiped away my tears – Comedian I Go Dye