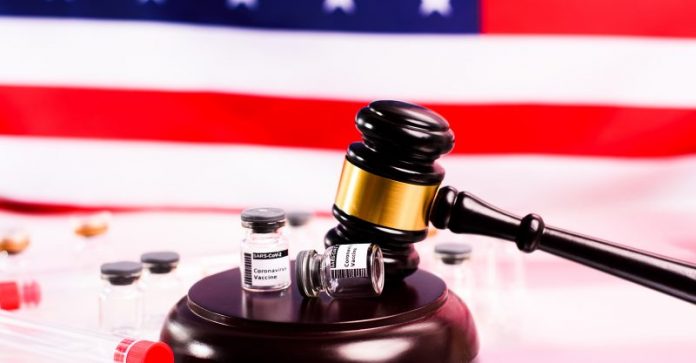 A good-government group is taking to the Supreme Court its challenge of the constitutionality of Massachusetts Gov. Charlie Baker’s 14-month-old pandemic-related state of emergency and its continuing restrictions on civic life and businesses.

The New Civil Liberties Alliance (NCLA) filed a petition for certiorari, or review, with the Supreme Court asking the justices to review the Massachusetts Supreme Judicial Court’s December 2020 ruling that held the Republican governor’s restrictions did not violate the plaintiffs’ federal constitutional rights.
In the case, the petitioners—individuals, business people, small businesses, and churches—argue that the current restrictions on their civil liberties violate their due process rights. Baker’s capacity limitations, curfews, and other restrictions on gatherings in private homes “underscore the need for judicial oversight of executive decrees, even during a pandemic,” NCLA stated.
Massachusetts is scheduled to rescind pandemic restrictions on Aug. 1 but there is no guarantee it will happen, according to a press release issued by Baker’s office on April 27:
“All industry restrictions will be lifted at that time, and capacity will increase to 100% for all industries, with businesses encouraged to continue following best practices. The gathering limit will be rescinded. Depending on vaccine distribution and public health data, the Administration may consider re-evaluating the August 1st date.”
The appeal in the case, Desrosiers v. Baker, was filed at the Supreme Court by NCLA, which describes itself as “a nonpartisan, nonprofit civil rights group” that strives “to tame the unlawful power of state and federal agencies and to foster a new civil liberties movement that will help restore Americans’ fundamental rights.”
In a statement, NCLA senior litigator Michael P. DeGrandis said Baker has exceeded his authority as governor.
“If the Governor can really choose which assemblies to ban as long as his stated purpose is neutral, and if he can choose which jobs or activities to ban just because it has a reasonable relationship to a government interest, no civil liberties are safe in this pandemic or the next,” DeGrandis said.
“The Constitution does not lose its vitality just because there is a crisis; in fact, that’s when we need it most. The Supreme Court should review the Desrosiers decision and reaffirm that a crisis cannot justify abandoning civil liberties or constitutional principles.”
Baker “seized unprecedented executive and legislative authority” when he issued 67 executive orders related to the pandemic, according to the group. Under the current state of emergency, the governor gets to arbitrarily declare which supposedly essential businesses may remain open and which non-essential businesses must close, without a hearing or other form of due process.
“Most of Baker’s orders from the last year have curtailed freedoms by banning economic, religious, educational, and cultural assembly in some form or fashion. But a health crisis does not empower the Governor to disregard the First and Fourteenth Amendments,” NCLA stated.
NCLA argues the Massachusetts court erred in finding that relaxed legal standards should be applied to its clients’ First Amendment freedom of assembly claims and that Baker’s restrictions could pass muster under the Due Process Clause so long as they were reasonably related to a valid state interest. Closer judicial scrutiny is called for when “the restrictions on personal liberty are so extreme and have been imposed by order of a single executive-branch official rather than a legislature.”
Baker’s office did not immediately respond to a request for comment from The Epoch Times.
At a press conference in Quincy on May 10 he told reporters he would not comment on the pending litigation, but said “the vast majority of advisories we’ve put in place have been pretty consistent with public health recommendations. They’re pretty consistent with what most other states have done as well.”
Baker said the state is moving forward, adding that large outdoor athletic events may now take place with stadium attendance caps at 25 percent, MassLive.com reported.
“We’ve continued to see positive progress on all the public health measures we pay attention to,” the governor said.
“We’re going to continue to make decisions based on data so any decision we make with respect to reopening is a positive one that’s sustainable. That makes us a little more cautious than others … generally speaking, we have not had some of the blowback they’ve had in other places when they’ve opened up a little more quickly.”
Baker said the “faster people get vaccinated, the more likely we can do the things we like to do.”