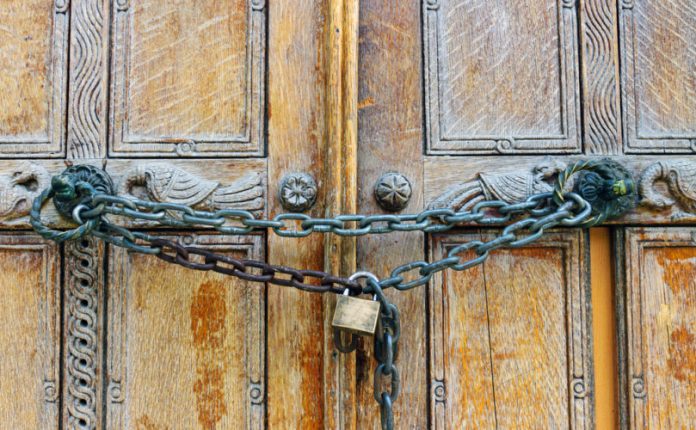 There is no possible explanation for a decision by prelates of the Church to refuse Christ’s injunction to Peter, ‘feed my sheep,’ that does not end in abject disobedience.

By Michael C. Hurley
For several years until only recently, I resided in the great city of London. I was there when Imperial College terrorized the world with a projected 3.5-percent infection fatality rate for COVID-19, after which the British prime minister, followed by a hapless American president and leaders around the world, decided to lock healthy people in their homes indefinitely. I was there when the archbishop of Canterbury and the Catholic bishops of Britain pleaded with the government to close the churches. I was there when the Church of England forbade its priests to answer the urgent call of the NHS for additional volunteer chaplains to minister to the sick and dying, for fear that soothing and saving those dying souls might endanger the mortal lives of those priests. It was then that I knew that this was no ordinary crisis, nor was it “about a virus.”

Also Read: Doctor commits suicide rather than give COVID vaccines

In the months since I left London in September 2020, I have kept in touch with a handful of writers there who, like myself, spoke out strongly against the lockdowns but who, unlike myself, have been strangely ambivalent about the push for universal, experimental gene therapy to combat a disease that is almost universally harmless. It almost seems as if the lockdowns were a successful “shock and awe” campaign to soften up a public eager to “get ’round the pub again” to accept whatever conditions might be imposed for that to happen.

Early in the lockdown debates, one such British writer would often insist that he would one day soon, through reason, logic, and persuasion, “win the argument” with his fellow Britons that the government’s response to the virus was needlessly heavy-handed and ineffective. That never happened. Nearly a year after the first lockdown, 80 percent of the British public was clamoring to be locked down even harder. As I wrote at the time, “[t]he Britain of today is a health-and-safety culture that has largely abandoned the religious faith that once gave it a sense of transcendent meaning. As a result, it finds itself obsessed with every threat — real or imagined — to its materialist worldview and sees goblins of risk and impending doom around every corner.”

At the time I wrote those words, I scarcely would have guessed that the same observation could soon be made about much of the United States. And for that matter, does anyone even recognize Australia anymore? It is the worldwide nature of this psychosis, and the fact that so much of the world is blind to the madness that only a small minority sees plainly, that caused me to urge these British writers to wake up and recognize that the “vaccine” is not a cure, but merely another aspect of the disease, and that we are engaged in a battle not against a virus or for people’s health, but against fear and for their souls.

As was not unexpected, my British friends agreed that we are in a battle but demurred as regards the idea that it has anything to do with Heaven and Hell. Atheism and its more polite cousin, agnosticism, have long had Britain by the throat.

I have never been much of an apocalyptic thinker or prone to see heavenly forces everywhere writ large on the canvas of history. God plays the long game, and history is littered with fools who presumed to know and tell others exactly what God was up to in the course of human events. I don’t aspire to be one of them. But for me, there was immediately, and remains, something noticeably different about this COVID phenomenon.

For starters, there is the never-before-in-history decision of the worldwide Catholic Church, to say nothing of the worldwide Anglican communion, to shut its doors and abandon the flock out of the fear of mortal death, which the Bible plainly tells us is Satan’s stock in trade.

There is no possible explanation for a decision by prelates of the Church to refuse Christ’s injunction to Peter, “feed my sheep,” that does not end in abject disobedience. There is no benign explanation for the willful decision to deny a starving world the imperishable bread of heaven, which is the Eucharist, and exchange it for the perishable bread of this world, which is the fleeting illusion of physical health and material comfort that the bishops sought to purchase by closing the churches. It was an astonishing, utter, and total abdication of the most obvious and fundamental tenets of the Christian faith. If we cannot recognize Satan in a conspicuous, unapologetic, worldwide abdication of the Faith by the princes of the Church, we have no hope of recognizing him in our own lives.

But there is more. There is a kind of spiritual blindness that has descended over the Church and the world that is eerily apocalyptic in its own right. Not only have the prelates of the Church abdicated the Christian faith, but they appear to be unaware that they have done so. They now cheerily pass the collection plate and propose to carry on as though what has just happened was perfectly normal, necessary, and done out of their “love” for their fellow man. Other bishops demonstrate an even more profound blindness, now proposing to withhold the sacraments of eternal life from those who cannot produce proof of having received a vaccine to protect their mortal lives. What hope of salvation would the leper, whom Jesus touched with his bare hands in violation of Jewish law, have had in the hands of these frightened hirelings?

Blindness — well-intentioned, perhaps, but blindness nonetheless — best explains their otherwise inexplicable ignorance of these people. And here again, Christ gives us the explanation.

Christ spoke of those at the last judgment who would experience genuine surprise that they were found among the goats. That among these will be many luminaries of the Church, we need have no doubt, as we are told they will protest in vain, “Lord, Lord, did we not prophesy in your name and in your name drive out demons and in your name perform many miracles?” Matthew 7:22.

It is in the juxtaposition with Truth that Satan is most clearly revealed. He does not merely tell Eve she will get away with it if she eats of the forbidden tree. He tells her, “ye shall be as Gods.” Satan deals in whoppers. Lately, we have seen his calling card in the COVID crisis. For a disease that 99.5 percent of the world survives without treatment or severe symptoms, we have rent the world asunder and with it very nearly the Church. The sheer irrationality of it all staggers the imagination.

But nothing approaches the whopper told by the archbishop of Canterbury and his corollaries in the Catholic Church that by starving Christ’s flock of the bread of heaven and the comfort of their shepherds, we are “loving our neighbor.” If we cannot detect the smoke of Satan in that statement, we have lost something far more important than our sense of smell, and we are in danger of something far greater than COVID-19.