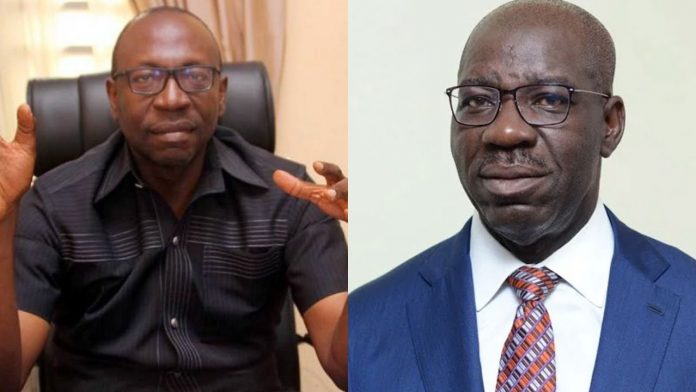 The political machines of the Peoples Democratic Party (PDP) and the All Progressives Congress (APC) have been rolled out for the governorship battle in Edo State. The warlords that will execute the warfare have been appointed by both parties. Leading the battalions are two governors who, perhaps, have latent battles to settle before now.

Leading the APC squad is Governor Umar Ganduje of Kano State, who the leader of the PDP squad Governor Nyesom Wike of Rivers State once admonished not take him as dollars that he can pocket. Wike, leader of the PDP squad, had developed an obsession against the APC over the years. Ganduje and Wike may radiate political rhetoric that could bemuse the Edo electorate in their choices. The former APC national chairman, Adams Oshiomhole, who is renowned for both his artistic dance and loquaciousness at campaign rallies may be contending with certain myths of mutual distrust in the state.

More challenging are the remnants of APC members, some of whom may be clandestinely working for the incumbent governor and PDP candidate from within.

Apparently, Oshiomhole may be confronting that teething challenge of working with some guerillas in the state APC. Some others may also be masquerading as APC supporters but could be having the skin of the opponent. There may be latent guerilla warfare from within. Oshiomhole could also be contending with the burden of the myth that he is a political trader and may be selling to external business partners, essentially, the political godfather of Lagos State. Already, Edo people have launched the campaign slogans – Edo is not Lagos; Edo is not for Sale. The message is already spreading like Australian wildfire even before the arrival of the political battalions of the two leading parties in the contest. Furthermore, the APC campaign squad may be hitting Edo State for the governorship battle with skeletal stains. Some members of the campaign committee are already drawing public attention over allegations of financial scam.

The scam identity constitutes a heavy burden or political liability in communicating to the people that APC is the way to go. However, internal forces in the state who already have disaffection with the incumbent governor and PDP candidate could be forces the PDP team would have to deflate and persuade the Edo people to align with their candidate.

Some others are also questioning the performance of the incumbent governor in his first tenure. Nigerians are waiting for the theatrical display of the teams in the warfront. Ultimately, who out spends the other might be a determinant factor. Already, there are warnings and threats against rigging the election. INEC appears to be on the hot seat, including security operatives. The PDP candidate, Governor Godwin Obaseki; and the APC candidate, Pastor Osagie Ize-Iyamu, will prove their credentials at the polls on September 19.

In subsequent reports, we look at the lieutenants and underlying issues in the election