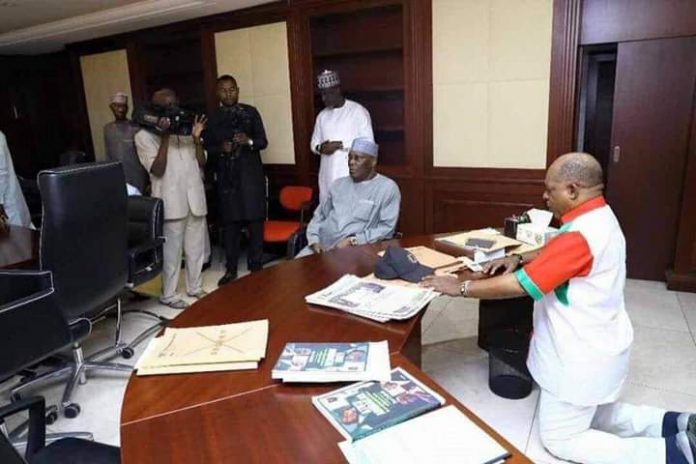 The Nigerian Supreme Court used to be the final arbiter of long-drawn-out legal crackers in Nigeria. Especially when the former ruling party held sway at the center for 16 years.

Under former President Olusegun Obasanjo in 2007, a PDP guber aspirant then, now transport minister, Rotimi Amaechi, became governor through an election he never contested. The Supreme Court set the precedence then, and re-affirmed it in 2011. And nobody raised any hackles, not even his bitter rival and plaintiff Celestine Omehia.

Omehia was Rivers governor for five months, before the court kicked him out, and declared Amaechi governor.

The only difference now is that Uzodinma even contested and came fourth, unlike Amaechi; plus, the PDP is in a bad position.

To many, the decision of the apex court might not be comfortable. It’s nothing other-worldly either.

PDP’s ex-presidential candidate and former VP Atiku Abubakar, for instance, has been there a couple of times in his scramble for presidency in the last 16 years. He knows how to act the patriot in situations like this—when defeat springs out on the brink of a legal victory. So he advised Ihedioha and the PDP to chin up.

“With regards to the judgment of the Supreme Court, which nullified the election of the candidate of the PDP, Emeka Ihedioha, as Governor of the state of Imo, I can only say that since the Supreme Court is final, we must accept its judgment,” Atiku tweeted after the court ruled on Tuesday.

But the party chairman can’t help whining bitterly, and he won’t take that—that the Supreme Court would void the lawful election of Ihedioha, who scored 276,404 votes, and award fictitious votes to declare Uzodimma , who scored 96, 458 votes, as Imo governor.

“It is highly irrational, unfounded, a provocative product of executive manipulation and a recipe for crisis, which should not be allowed to stand,” said Uche Secondus in a press briefing the party’s National Working Committee addressed in Abuja on Thursday.

The businessman did some lawyering, too, by making legal points of how Uzodinma couldn’t identify figures, how there were no witnesses from the 308 cancelled polling units, and how the court went so low as to be counting votes it awarded to Uzodinma.

The he made his appeal against the Supreme Court ruling.

“…We demand that the decision of the Supreme Court on the Imo Governorship Election be reviewed and reversed in the interest of justice.”

Nigerian legal luminaries have yet to comment on the PDP appeal against the apex court decision. Perhaps because it is all baloney—a gust of hot air from the chairman of Africa’s largest party against the final court of the land.

The Supreme Court can never reverse itself. It’s a given. It may only revisit its judgment under Order 8 Rule 16, Supreme Rules—just to correct clerical errors or omissions only.

Not done with the impossible appeal, Secondus also demanded that Justice Tanko Mohammed, the CJN, and the seven justices on the Imo Governorship Panel recuse themselves from the remaining cases involving PDP in the Supreme Court.

The second demand was not just off the cuff. As a party that keeps its ears close to the ground, the PDP claimed the APC government is plying Justice Tanko and the Supreme Court to wreak more political havoc.

“Our party has it in good authority that Justice Tanko and his panel are working on instruction from certain forces in the Presidency to use the Supreme Court to take over states lawfully won by the PDP and award them to the APC,” Secondus said.

So four more states—Sokoto, Bauchi, Adamawa and Benue—won the PDP holds are now at the mercies of the apex court he said is compromised.

Tambuwal won Sokoto guber election with a margin of 342 votes which the APC candidate Ahmed Aliyu is contesting. Bauchi’s Gov. Mohammed has less than 1500-vote margin and other issues Justice Tanko and the bench will resolve.

It’s all a cliffhanger now. Secondus has just added to the suspense.

The cat could jump either way January 20.