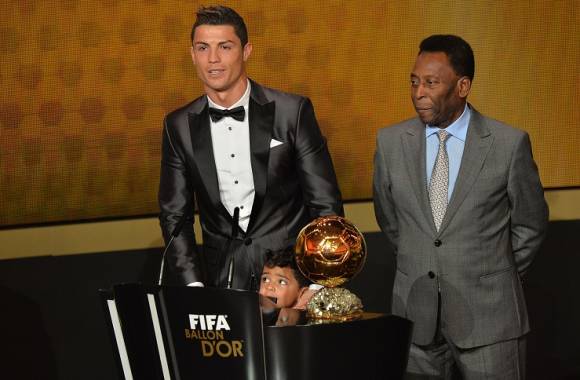 Brazilian legend, Pele has congratulated Cristiano Ronaldo after he surpassed him in the international scoring charts .

Real Madrid superstar took his international goal tally for Portugal to 78 on Thursday by bagging a hat-trick in a World Cup qualifying clash with the Faroe Islands.

Ronaldo’s treble heroics have carried him above legendary Brazilian Pele and into the top five on the all-time list.

Already a four-time Ballon d’Or winner and the leading marksman in the illustrious history of his club employers, the 32-year-old continues to set records tumbling at every turn.

Only Ali Daei (109), Ferenc Puskas (84), Kunishige Kamamoto (80) and Godfrey Chitalu (79) now sit above Ronaldo on the international roll of honour.

Catching Daei will be a big ask, but the Blancos superstar will fancy his chances of reeling in Madrid hero Puskas.

Ronaldo has already made 144 appearances for Portugal, but there is the promise of many more to come as he shows no sign of slowing down.

Pele only took 92 games to reach 77 goals for Brazil, but he is happy to acknowledge the achievements of a modern day icon.

Ronaldo’s next opportunity to add to his tally will come on Sunday when Portugal take in a trip to Hungary – the home of Puskas.