THE National body of the Petroleum and Natural Gas Senior Staff Association of Nigeria (PENGASSAN) expresses grave concern over the handling of the succession formalities in some parastatals and agencies of government whose chief executives were recently removed.

In a statement by the Acting General Secretary, Comrade Lumumba Okugbawa pointed out that “While it is on record that the Federal Government was unambiguous on the direction to follow in a circular from the office of the Secretary to the Government of the Federation, which some organisations did the contrary.”

With the unfolding events at the Petroleum Products Pricing Regulatory Agency (PPPRA), which presently has two Executive Secretaries in acting capacities, PENGASSAN is urgently calling on the Federal Government to respect its own directive with regards to the handing-over process and request all parties involved to revert to status quo pending the final resolution of the matter by the Federal Government.

Due to the sensitive nature of the Agency’s functions and activities which are crucial to the socio-economy of Nigeria, PENGASSAN desires prompt resolution of the issue as soon as possible in order to stem the consequences of a prolonged industrial unrest.

PENGASSAN as a responsible trade union association will be open to dialogue and meaningful engagement in finding amicable resolution to the issue. 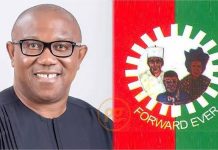