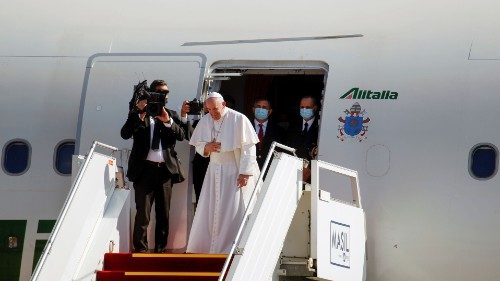 Pope Francis, on his return flight from Baghdad, reviewed his four-day trip to Iraq and criticised the treatment of women.

The plane with the Vatican delegation that had been vaccinated against COVID-19 and more than 70 journalists landed in Rome on Monday afternoon.

Speaking to journalists during the flight, the 84-year-old denounced the treatment of women on the occasion of International Women’s Day, which fell on Monday.

The head of the Catholic Church said he could not believe it when he was shown lists of women offered for sale, just as the terrorist militia Islamic State had done with Yezidis.

Human trafficking was taking place everywhere and also in the centre of Europe, he said.

In Rome, he had met with women who had been exploited and abused.

“Women are more courageous than men, that’s the way it is,” the Argentinian pontiff noted.

The tight programme with journeys across Iraq had been exhausting for him, the pope said.

The ruins of houses of worship in the city of Mosul, destroyed during the war against Islamic State, and the meeting with the highest Shiite cleric in Iraq, Grand Ayatollah Ali al-Sistani, left a great impression on him, he continued.

The meeting with the 90-year-old grand ayatollah had done him good in his soul, Francis said.

“Al-Sistani was a prudent and wise man and very respectful at the meeting behind closed doors in the southern Iraqi city of Najaf.

“He usually never stands up during visits, but he stood up twice with me,” the pope said.

He maintained that he would continue to move forward with other religions through inter-religious dialogue.

During his trip to Iraq, he met al-Sistani as well as other representatives of Islam and the Yezidis in the plain of Ur in southern Iraq.

According to the Bible, this is where Abraham, whom Jews, Christians and Muslims regard as the patriarch of their faiths, is said to have come from.

The project is in line with his encyclical Fratelli Tutti (All Brothers), according to which all human beings are brothers and sisters.

Pope Francis ended his historic trip after a four-day visit in which he delivered a message of forgiveness, perseverance and hope.

Francis is the first pope to travel to Iraq, a visit that the Christians in the north of the country in particular had long waited for.

On Sunday, the 84-year-old flew to Mosul and Qaraqosh, where he was greeted by crowds of believers in spite of the coronavirus pandemic.

In Mosul, Francis prayed on the church square, which with its destroyed houses of worship, became a symbol of the suffering of Christians during the war against Islamic State.

The decision to make the trip was made at the invitation of the Iraqi ambassador to the Vatican, Francis explained.

The plan quickly came under criticism because of the coronavirus pandemic and the security situation in the Middle Eastern country.

Francis said the coronavirus problem had preoccupied him for a long time.

Prayerfully and after much deliberation, he had decided nonetheless to travel to Iraq.

There were once more than 1 million Christians in Iraq, a country of more than 38 million, but now their population is estimated to be between 250,000 and 400,000 after years of war, religious persecution and a steep economic decline.

The pontiff landed in Baghdad on Friday, defying the global pandemic and security concerns after a series of recent attacks in Iraq.

U.S. President Joe Biden, paid tribute to the papal visit, saying it sent an important message about brotherhood and peace.

“Mosul a city that only a few years ago endured the depravity and intolerance of a group like ISIS is a symbol of hope for the entire world,” Biden said on Monday.

The president said he would continue “to admire Pope Francis for his commitment to promoting religious tolerance, the common bonds of our humanity and interfaith understanding.”