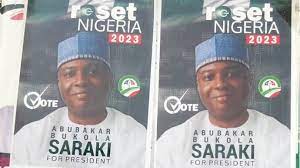 As former President of the Senate, Dr Bukola Saraki runs about trying to fix the PDP as the party’s national leader, there are  plans he nurses that nobody knows for now.

Perhaps he plans to reset Nigeria. Perhaps he doesn’t.

But posters screaming his name and the 2023 presidency were sighted in conspicuous areas of Abuja, including Wuse, on Tuesday.

Some of the posters were also pasted around the PDP  national secretariat—Wadata House in Abuja.

But Yusuph Olaniyonu, his media aide, hs reportedly denied his boss was behind the campaign posters.

The PDP has left his ticket up for grabs irrespective of where aspirants come from.

As many of the party stalwarts are expected to begin scrambling for it soon.