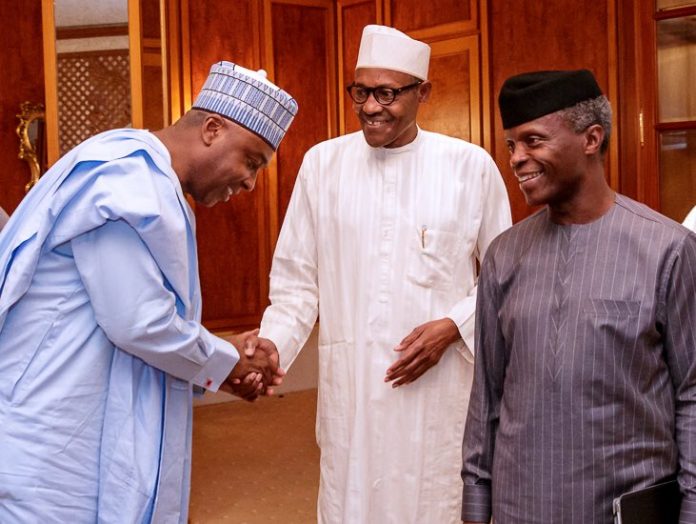 Senator Abu Ibrahim (APC-Katsina) has said peace will be elusive in the Nigerian Senate until its President, Bukola Saraki, relinquishes the position.

In an interview with journalists on Thursday, Mr Ibrahim commended Mr Saraki for honourably leaving the All Progressives Congress(APC).

However, he asked him to follow up with the next logical deed: by honourably resigning.

“I think it is commendable that he has left the party. He has chosen the path of survival because it is the issue of political survival not any thing for Nigeria.

“Again, let him be gentleman enough and resign as Senate President.

“If he does not, we will never have peace in that Senate because it is absolutely clear that APC has majority to produce the leadership.

Mr Ibrahim debunked claims that the PDP has the majority in the Senate with recent defections.

“I hear the PDP claiming majority, but it is crystal clear that APC has majority. We will have more members. We will conduct two bye-elections and we will have the two members.

“We also have some alliance with APGA. It is clear that APC has majority.

“Saraki should resign as Senate President.”

Mr Ibrahim also debunked as unfounded an allegation that some senators attempted to break into the Senate chamber on Wednesday to reconvene plenary.

“How do you break into the chamber? If we like we can reconvene legally because it is legal for us to reconvene.

“We do not need to break into the chamber when we have the number. I will never subscribe to that.We can reconvene. The rules are there that if we are up to 30 we can reconvene.

Sen. Abu Ibrahim
“Why should we break into the chamber when we can reconvene legally and do what we want to do.

“It is legal. I do not see why anybody should contemplate that we can break into the chamber.

“However, if the leadership does not ask for peace, it will not get peace. Peace is a function of leadership.

“I have been in the Senate for about four times. I cannot allow anybody to manipulate me. I cannot take it.”

He further said: “Nobody was elected as Senate President. We all came here as senators. So we have equal footing. We gave you leadership.

“If you fail to give us the right leadership and if majority of us don’t want you any more, you have to leave.

“Saraki was elected by us. At any time majority of us say he should go he has to go.

He said the APC has nothing to worry about some members leaving to team up with the PDP.

“For the past two years, Saraki has undermined the government.

“He has allowed frivolous motions to attack the president and the government. His continued stay as senate president did not augur well for the APC government.

“For somebody to be in the same party, same government and he did not see anything good in the president was disturbing.”