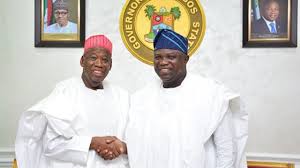 President Muhammadu Buhari has been listed as one of the dignitaries to discuss strategic importance of collaboration among key institutions for national development at the first Lagos-Kano Economic and Investment Summit.

The summit, which is scheduled to hold at the Jubilee Chalets, Epe, Lagos, between February 28 and March 1, will focus on thematic areas such as security, governance, ease of doing business, agriculture, tourism, internally generated revenue, education and key infrastructure like power, transportation, and urban waste management.

Addressing a joint news conference at the Bagauda Kaltho Press Centre in Alausa, on Tuesday, the Chairman, Steering Committee, and Lagos State Commissioner for Finance, Akinyemi Ashade, said the summit is specially designed to create awareness on the investment climate and policy thrust of both Lagos and Kano State Governments.

It will also create a platform for dialogue for potential investors, with the overall objective of national development.
Furthermore, it will offer opportunity to share emerging investment ideas with the target audience and engage both states’ un-utilised and under-utilised resources toward efficiency and prosperity.

Ashade said: “Globally, inter-state and regional partnerships are fast becoming benchmarks and leading practices for economic growth and development. Equipped with this knowledge, the governments of Lagos and Kano states, under the visionary and able leadership of their Excellences – Mr. Akinwunmi Ambode, and Dr. Abdullahi Umar Ganduje respectively decided to take a leading role towards maximizing the unique comparative and competitive economic and investment opportunities of both States.”

Explaining the joint sunnit, he noted that it was common knowledge that both states share peculiar history and pedigree in demography, economic viability, and leading roles within each of their respective geopolitical regions.

“We both have the highest population and cosmopolitan spread in Nigeria, while I make bold to say that the performances of the two states in areas of economic reforms, improved their business environments and contributed significantly in boosting Nigeria’s “Ease of Doing Business” Global Ranking from 169 to 145 for the year 2018 as measured in 2017.

“This Summit, the first of its kind in sub-Saharan Africa, signals the first phase in the journey towards a long-lasting partnership between the two states and promises to help boost economic development and foster national unity amongst others. Hence, the choice of the theme “States Partnership as a tool for Sustainable Economic Development” for the Summit,” Ashade said.

He also disclosed that adequate measures had been firmed up to ensure that the summit is not another talk show, hence, the decision to sign a Memorandum of Understanding (MoU) between the two states, designed to seal and sustain the partnership.

“The Governments of Lagos and Kano states are optimistic on the outcomes of this Summit, in terms of Sustainable National Development. We hope that the ensuing collaboration will offer a constructive case study for other states of the Federation to emulate by looking inwards and developing blueprints for their own inter-state collaborations that will propel them towards achieving economic sufficiency.

Commenting, the Chairman, Technical Committee for the summit from Kano, Dr Shamsudeen Usman, also said Lagos and Kano states had a lot of similarities, and that the summit will bring both to the fore with the overall objective of learning from each other to foster mutually beneficial relationship.

Usman, a former Minister of National Planning, said there have been instances in the past when Kano had understudied Lagos in areas such as governance and internally generated revenue, and that the summit would focus on such areas with the aim of playing them up for the people’s benefits.

The summit, which will be periodic, can be registered for at www.lagoskanosummit.org, while other members of the public can follow discussions through the social media handles.