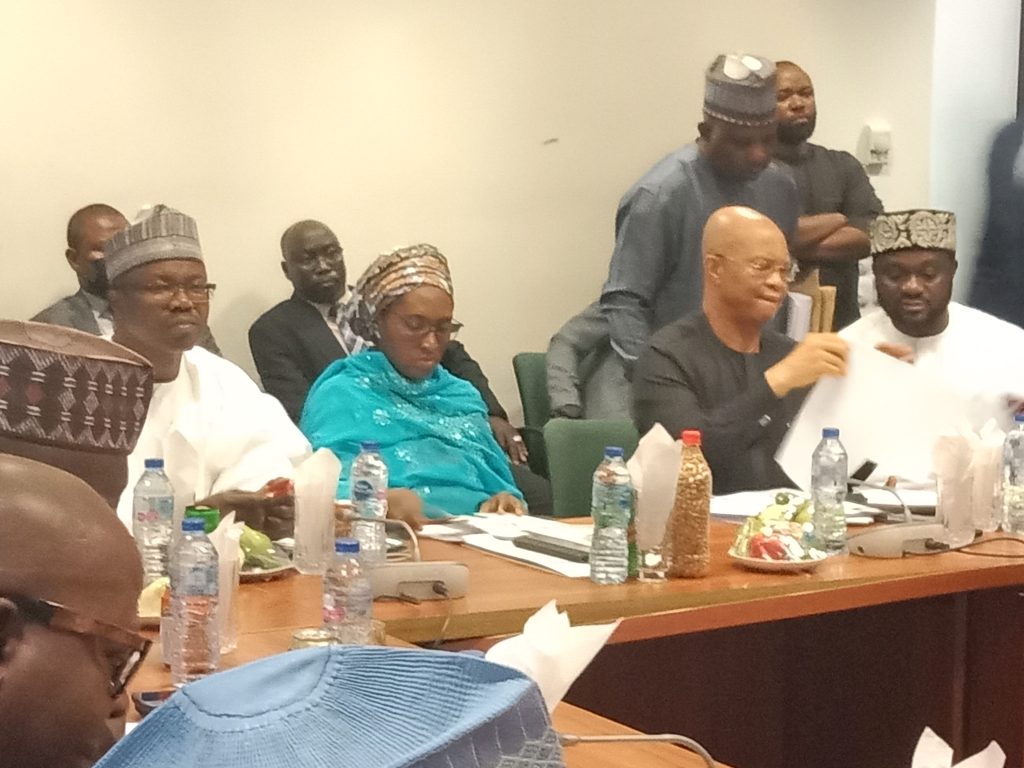 Quit if you aren’t ready for the Job, Reps tell Humanitarian Minister
Share this on WhatsApp
Spread the love

The House of Representatives on Tuesday asked the Minister of Humanitarian Affairs and Disaster Management, Hajiya Sadiya Farouk to quit as minister if she was not ready for the job.

This followed her incessant failure to appear before various Committees of the House to defend the ministry’s 2023 budget proposal.

Rep. Muktar Betara, Chairman, House Committee on Appropriation said this during an investigative hearing on alleged budget insertion of N206 billion in the 2023 budget of the ministry in Abuja.

The News Agency of Nigeria reports that the N206,242,395,000 billion is for the National Social Safety Nets Project, which is domiciled in the ministry.

NAN reports that the world bank is the funding sources for the project.

A visibly angry chairman of the committee had queried why the Minister was not present to defend the insertion, adding that if she was not ready for the job she should quit.

“Most times the committee calls the minister, she refuses to come. If she is not ready for the job, she should quit,” Betara said.

Explaining the error in the ministry budget, the Minister of Finance, Hajiya Zainab Ahmed said the item was wrongly coded by the Budget office.

She added that the minister of Humanitarian Affairs and Disaster Management should have called the attention of the budget office to the anomaly like her counterparts in other ministries.

She said the minsitry of Defence, Federal Minsitry of Power among others also committed same error.

She called for collaboration among Ministries Department and Agencies of Government (MDAs) in a bid to forestall such oversigth.

The minister said, “the project was correctly described in the submission in the 2023 budget, but unfortunately the Budget Office used wrong cod.

She said this resulted in it being captured as “Purchase of Security Equipment” in the budget preparation system.

NAN also reports that the Minister of Humanitarian Affairs and Disaster Management, represented by the Permanent Secretary of the ministry, Dr Nasir Gwarzo said the minister directed him to represent her

“The minister said she did not understand the budget code, it was the media that reported the error as padding.

“We did not go to the media refuting the work the committee or the Ministry of Finance have done, but we wrote for clarification which was given.

The amount of money in question was a counterpart funding that was given by the world bank, if it was done without appropriation, Nigerian would not have known what was borrowed,” he said.

In their response the members of the Committee, Rep. Igariwey Enwo (PDP-Ebonyi) and the Deputy Chairman, Appropriation said the budget should not be subjected to controversy.

“We are talking about money we borrowed, we should also know how we spend the money.

“Raising unnecessary controversy about the budget will not augur well. There should be inter agency coordination.

Rep Benjamin Kalu (APC-Abia) said, ” my concern is that the image of our country should be protected in respect of the budget.

” I reached out to the minister of finance on the issue but nothing was done and I could not go ahead to give the media the information its needed at the point in time.”