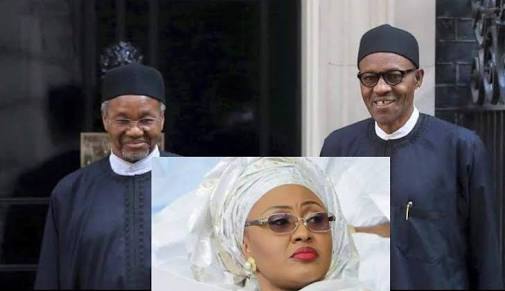 A pro-democracy and civil rights group, Human Rights Writers Association of Nigeria, HURIWA, on Tuesday, advised President Muhammadu Buhari to take a leave of absence to enable him resolve his family crisis to avoid undue distractions.

The rights group suggested that President Buhari should refer the intense disagreements between his wife, Aisha and Ms. Fatima the daughter of Mamman Daura, his nephew to the National Human Rights commission (NHRC) for swift resolution “so the altercation can abate.”

It stated this in a statement released on Tuesday by its National Coordinator, Comrade Emmanuel Onwubiko and the national Media Director, Miss Zainab Yusuf.

HURIWA described as an avoidable political scandal, the “heated verbal exchanges between Aisha Buhari and Fatima, the daughter of one of the most powerful political forces behind president Buhari and his uncle Alhaji Mamman Daura.”

The Rights group warned that it will be unconstitutional if official time and resources are deployed by the presidency to escalate a family feud which may infringe on the sacred constitutional oath of office he swore before assuming duty as the president of Nigeria.

It reminded Buhari that “Nigeria is currently contending with massive societal, economic, security and environmental challenges requiring total attention and concentration of the President and his team which may not be properly attended to if family feuds wouldn’t let him focus on delivering the democracy dividends.”

HURIWA said the entire scenarios of domestic squabbles now exported to the public space has graphically painted Nigeria as a vassal state even when it is clear that Nigeria is a constitutional democracy with principles of rule of law.

The Rights group said under the extant constitution, “it is unconstitutional for the holder of the office of President to let his domestic issues stay in the way of the qualitative and articulate pursuit and implementation of his job specifications just as these sets of constitutional duties of the President does not include using official time and resources to settle or escalate domestic misunderstanding which ordinarily should have been resolved internally without making it or enabling it to constitute a horrendous nuisance and global embarrassment to the Country.”

HURIWA called for an immediate truce or a reference to the National Human Rights commission of Nigeria for a quick resolution or on the alternative Mr President takes few days off to resolve the domestic disputes himself as head of his family.