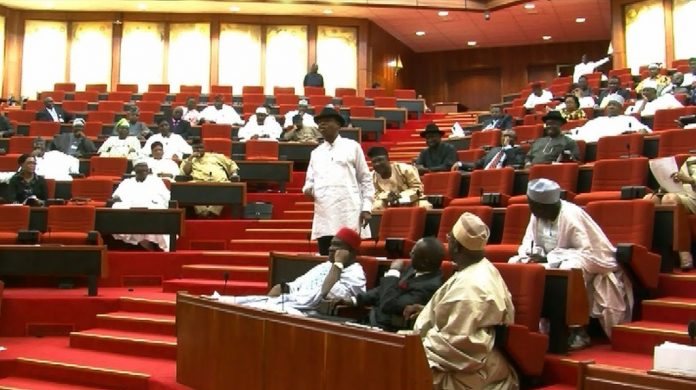 Some senators have urged the upper chamber to initiate the process to impeach President Muhammadu Buhari.
The federal lawmakers said he didn’t seek legislative approval before he withdrew $496m from the Excess Crude Account to purchase military aircraft.
Senator Mathew Uroghide moved a motion at the plenary on Thursday–that ‎Sen. President Bukola Saraki allow the House to invoke Section 143 of the Constitution.
According to Uroghide, Buhari flouted Section 80 of the Constitution which stipulates that all government’s spending must be appropriated by the legislature.
On Wednesday, Saraki read a letter from Buhari ‎in which the president informed the Senate the money had been withdrawn and paid to the US for the 12 Super Tucano aircraft–without of legislative approval.
Buhari said he did that in order to beat the deadline for the arms deal which will be delivered in 2020.
“Recently, approval was granted by the United States government but with a deadline, within which part payment must be made otherwise the contract relapses,” the president said in the letter.
“In the expectation that the National Assembly will have no objection to the purchase of these highly specialised aircraft, which is critical to national security, I granted anticipatory approval for the release of $496,374,470. This was paid directly into the treasury of the United States government.
“I am therefore writing seeking approval of the Senate for the sum of $496,374,470 (equivalent to N151,394, 421,035) to be included in the 2018 Appropriation Bill which the National Assembly is currently finalising.
“The balance of the requirement for critical operational equipment is still being collated from the different security services and will be presented in the form of a supplementary appropriation bill in due course.”
Senator Shehu Sani has described the expenditure as “a gross abuse of the Constitution.”
He, however, said he was not in support of the impeachment call.
The Kaduna senator asked that the money should be refunded and the transaction started afresh to allow due process.
Defending the president, Sen. Abu Ibrahim described the impeachment call as a PDP conspiracy.
He recalled that former Presidents Olusegun Obasanjo and ‎Goodluck Jonathan made withdrawals from the ECA fund without seeking National Assembly’s approval.
According to him, none of the state governors has ever sought legislative approval before withdrawing from ECA.