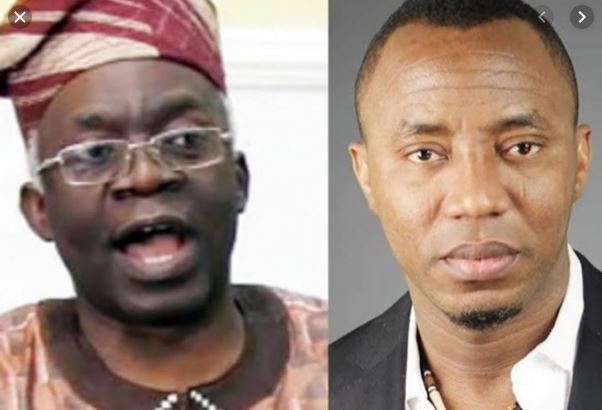 Falana made the allegation in Lagos at the public presentation of a book, Testimony to Courage, essays in honour of Premium Times publisher, Dapo Olorunyomi on Thursday.

The Senior Advocate of Nigeria (SAN) accused Justice Ijeoma Ojukwu of the Federal High Court, Abuja of bias against his client, Omoyele Sowore, adding that the online news publisher had been convicted without trial.

Falana, who was the chairman on the occasion, noted that he had decided not to return to the Justice Ojukwu-led court.

He said: “Nobody has been given the kind of bail (condition) Sowore was given. All those who looted the treasury have never had their movement restricted. Sowore has been granted bail, but his movement has been restricted to Abuja. His family is in America. He does not live in Abuja. He has no house in Abuja. Yet, he has been asked to stay in Abuja. The trial may last for 10 years, but he cannot leave Abuja. It has never happened in Nigeria before. Sowore has been banned as a journalist from speaking. As a politician, he cannot address a rally until the case is determined. We don’t know how long it will last.”

According to him, he had been practising law for 37 years, but had never witnessed the sort of drama that transpired in the court on Wednesday during the trial of Sowore, adding that he was shocked when he arrived at the court and saw gadgets being prepared for prosecution witnesses who could not testify in the open court.

“All proceedings and hearings should be in the open. So, if you are going to have anything in camera, for security reasons, for the interest of children, you will apply in the open court. But no application was made. And so, when I asked what happened and the judge pretended not to know, I said, ‘My lady, this case cannot go on because behind us, your court has colluded with the prosecutor to take witnesses behind us in your court and these are the gadgets here.’ I said the prosecutor had confided in me that the witnesses would pass through her door so that they would not be seen by us.

Falana said the judge had already sentenced Sowore and his case mate, Bakare, without trial by confining their movement to Abuja, adding that steps were being taken for the matter to be moved from the court and Abuja in particular since the alleged crime was not committed there.