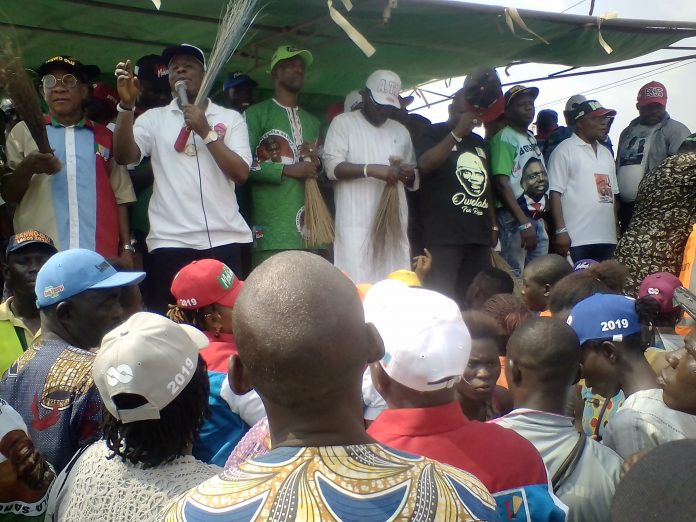 The Ojokoro chapter of the All Progressive Congress (APC) has inaugurated an Independent Campaign Group saddled with the responsibilities of canvassing for votes all round the nooks and crannies of Ifako Ijaiye constituency II for Hon. Raheed Olanrewaju Makinde and every other party candidates vying for a political positions there.

The official inauguration of the ICG held in the lawmaker’s constituency office within Ojokoro,at the instance of political stalwarts in the area and other stakeholders, witnessed a large turnout of party faithful, who stated their resolve to ensure total victory for the party at the coming elections in few weeks time.

Hon.Rasheed Makinde while speaking  with newsmen on the importance of the inauguration, hinted that many of those selected are entrenched politically in the grassroots level doing good works for the party,so their selection is well deserved.

He however noted that in whatever guise APC remains formidable in Ojokoro and victory is certain going by the feats of the party in whole of the constituency.
“I am confident with the list of individuals inaugurated today because they are grassroots mobilizers in time past with positive antecedent, they will certainly deliver.
“Our party has brought good governance to the door steps of our constituents, so no worries for us, the developmental strides are spread across and more can be expected when we are voted in again.

The Director General of Makinde  Campaign organization, Hon.Rapheal Olugbenga Falegan (JP) former Deputy Leader of Ojokoro LCDA, noted that by the inauguration the members are expected to go all out to sensitise and rally support for the success of the candidates at the coming polls.

“As a party our slogan is next level and think the people of Nigeria will give that four years opportunity to continue with the good works, it is evident for all to see, starting from our own representative at state legislature Hon.Rasheed Makinde. “He has changed the face of governance here we can continue to enumerate his works starting from the fly over bridge at Abule-Egba, giving of Jamb forms and empowerment of widows.
“He has also facilitated the construction of 37 roads in this constituency, if he is given another chance now,I think he will do more to bring the dividend of democracy to the people.

The Federal House of Reps candidate Hon.Owolabi James Adisa,fondly called ‘Omo iya elewedu’ was physically present at the inauguration, he noted that if he is elected he would have officials in the two councils that made up his federal constituency who will give him feedbacks from his constituent on what they really wanted discussed at the green chamber, which to him the essence of his aspiration.

“Makinde is a brother who knows what legislative business is all about,I cannot but commend him and support his second term bid.

“Real representation in my view is saying what your people want said, because you are their mouth piece in the green chamber, I will ensure I have officers who will come from each of the councils with feedbacks from time to time of what my people want and this will inform my legislative moves there at the national.
“The Ifako Ijaiye Federal constituency is in for a big treat as my legislative prowess at the grassroots level remain golden and a pointer to better days ahead.

The newly announced member of the Governorship Advisory Council (GAC) in Lagos State from Ojokoro, Dr Waleel Ade Ipaye in his keynote address, noted that the National leader of the party Asiwaju Bola Ahmed Tinubu targets not less than 6,250,000 votes from the state and has distributed what votes is expected from each constituencies in the state.

According to Ipaye Ifako Ijaiye as a whole is to churn out 500,000 votes, with the two council areas having to deliver 250,000 votes each.

He also hinted that if they meet the target, favourable allotment in the executive cabinet of the state will be theirs.

“The 250,000 votes we are talking
about makes it compulsory for our people to move out and campaign
vigorously for votes.
“We are not saying we are going to rig the election but for our people to vote for APC and all our candidates from the President to our Governorship candidate Mr. Babajide Sanwoolu, Senatorial candidate Adeola Olamilekan Yayi, Hon.Owolabi James Adisa for House of Reps and Hon Rasheed Makinde for the state House of Assembly.

“They should ensure that they vote for these four individuals for continuous economic development in not only Lagos but the whole of Nigeria, we are not talking about container economy but infrastructural development which APC is cut out for not like the
PDP noted for container development.
Commenting on Permanent Voters Card collection, Ipaye hinted that it is a continuous process.
“The PVC collection have been an ongoing process before now and we have encourage our people who have registered to go and collect their PVC, it is still continuous so those who have not yet collected their PVC should endeavour to do so.
“It is the only tool they have to vote on the day of election for all the APC candidates. So that we will continue to progress”,Ipaye reiterated.

The APC local government chairman in Ojokoro, Evangelist Adewale Bello, revealed that in recent times the percentage of PVC collection in Ojokoro has increased to 70 percent due to a concerted effort of the party aided by INEC’s distribution of PVCS to collation centres closer to the people.

“Our gathering here is to help our party to win this coming election by campaigning door to door, house to house and room to room to achieve the target.
“As at now collection of PVC is at 70 percent but before it was lower,
recently when INEC called all the stakeholders saying they have
distributed the PVC to all the collation centres.
“That one helped us very much and we also mobilized our people down to the collation centres, by and large we still want people to still go and collect the remaining ones.
“By God’s grace we are targeting about 150,000 to 200,000 votes and we shall surpass it.

The youthful leader of the Legislative Leader of Ojokoro LCDA.
Councillor Kolawole Osho appraised the impact of Hon.Rasheed Makinde who he noted has done much to improve the lots of the people and set a template for them to follow,adding the incumbent Governor of the state Mr.Akinwunmi Ambode has constructed in an unprecedented manner 37roads in the constituency,same goes for the federal government rail project.

“Hon.Makinde’s has laid an enviable template for us to copy,Ambode is constructing 37 roads in Ojokoro, Babajide will continue we were also privy to the rail construction ongoing by the Federal government, so the youths has no reasons not vote for the progressive.” Osho affirmed.

Alhaji Hamzat Azeez the CDC Chair Ojokoro LCDA while speaking with newsmen said Makinde’s performance in the first term qualifies him for a second term.
“We are here to launch the campaign programme of Honourable Makinde, he
has been picked as our candidates for the second term because he has
performed, in terms of our children in the state civil service, skill
acquisition, facilitation of road construction, empowerment of youths and aged,some of it are been done in various form, buying of JAMB forms and more.
“The previous federal administration introduced green revolution which prides agriculture so high but was jettisoned and that created a lot of problems for us, we had Operation Feed The Nation which was also jettisoned, if we had been growing our agriculture in time past it would have boost the ability of creating more employment for our people within the country but we engage in importing of goods and services from abroad and this has killed our own opportunity of creating jobs for our own children here.
” This is what the present administration in this country is doing differently, they are creating and establishing everlasting programmes that will aid our children and those yet unborn.
“We are saying they should vote APC so that we can have continuity.
“This is the umbrella body for all the CDA’s,we have told our CDA
members to go out enmasse to vote in the coming election and they will do that because they know without it they cannot make input into the selection of our leaders.

Ali Meidabu the general secretary for Arewa community in Ojokoro LCDA, noted that,” Hon.Rasheed Makinde has done remarkably well in his first tenure in office that is why we are all here to support him and ensure he returns to the Lagos Assemblyman Ifako Ijaiye constituency II for his quality representation,humility, accommodating mien whenever we want to see him he is simply accessible and we will give him all the support.