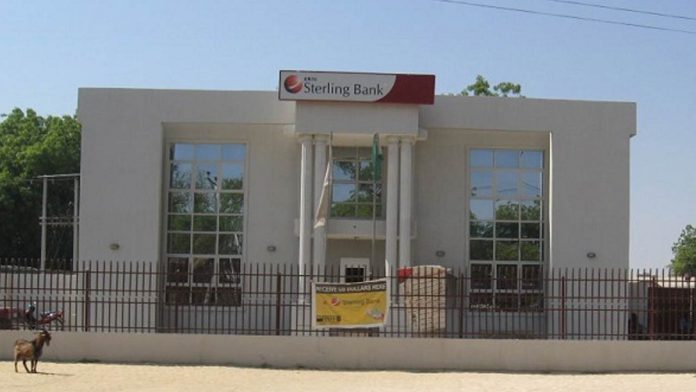 By Chioma Obinagwam
Sterling Bank has witnessed a continuous increase in its Non-performing loan(NPL) ratio, jumping from 4.8 per cent in its financial year ended December 31, 2015, to 9.9 per cent in the same period in 2016 and subsequently rising to 11.95 per cent in its first quarter(Q1) ended March 31, 2017.
The company’s results published on the Nigerian Stock Exchange (NSE) website revealed.
NPL is the sum of borrowed money upon which the debtor has not made his scheduled payments for at least 90 days and is either in default or close to being in default. Once a loan is nonperforming, the odds that it will be repaid in full are considered to be substantially lower.
More so, an NPL ratio is the amount of NPLs over total loans, expressed as a percentage.
At 11.95 per cent, the bank’s bad loans is quite on the high side when compared to the 5 per cent prudential requirement stipulated by the Central Bank of Nigeria (CBN) for Deposit Money Banks.
Nevertheless, the increase in the NPLs is coming despite a marginal decline in its Loans and Advances to Customers, which dipped from N468.25 billion on December 31, 2016 to N467.38 billion in Q1, 2017.
Total Liabilities also rose to N803.74 billion from the N748.53 billion in the corresponding period inspite of a 6.3 per cent increase in Total Assets from N703.89 billion in prior year to N748.53 billion in the review period.
ALSO SEE: Sterling Bank bags Deutsche Bank’s Excellence Award
Moreover, the bank’s profit for the Q1 period closed lower at N1.87 billion from the N2.54 billion recorded in the same period in 2016.
Further extracts from the results showed that Net Interest Income increased by 41.6 per cent to N56 billion as against N39.5 billion in 2015, as a result of 22.5 per cent increase in Interest Income, while Operating Income was N68.3 billion. Operating Expenses increased marginally to N50.6 billion from N49.7 billion in 2015.
Reacting to the results, the Chairman of the bank, Mr. Asue Ighodalo, at the bank’s 55th Annual General Meeting (AGM) held in Lagos, said, “… we expect that the Federal Government’s(FGs) fiscal intervention schemes alongside supportive economic policies will create pathways for economic recovery. Over the next five years, we will be steering our ship differently and aggressively growing the retail business through electronic channels.”
He also pledged that the Bank would continue to boost innovative banking – driven by market insights that would enable it   serve its customers satisfactorily, implement significant investment in technology-led growth initiatives and accelerate the growth of its Non-interest Banking segment.
However, the bank declared a total dividend per share payout of N2.02, broken down into 25 kobo interim dividend and a final dividend of N1.77, approved by shareholders of the bank at the AGM amidst increasing NPLs.