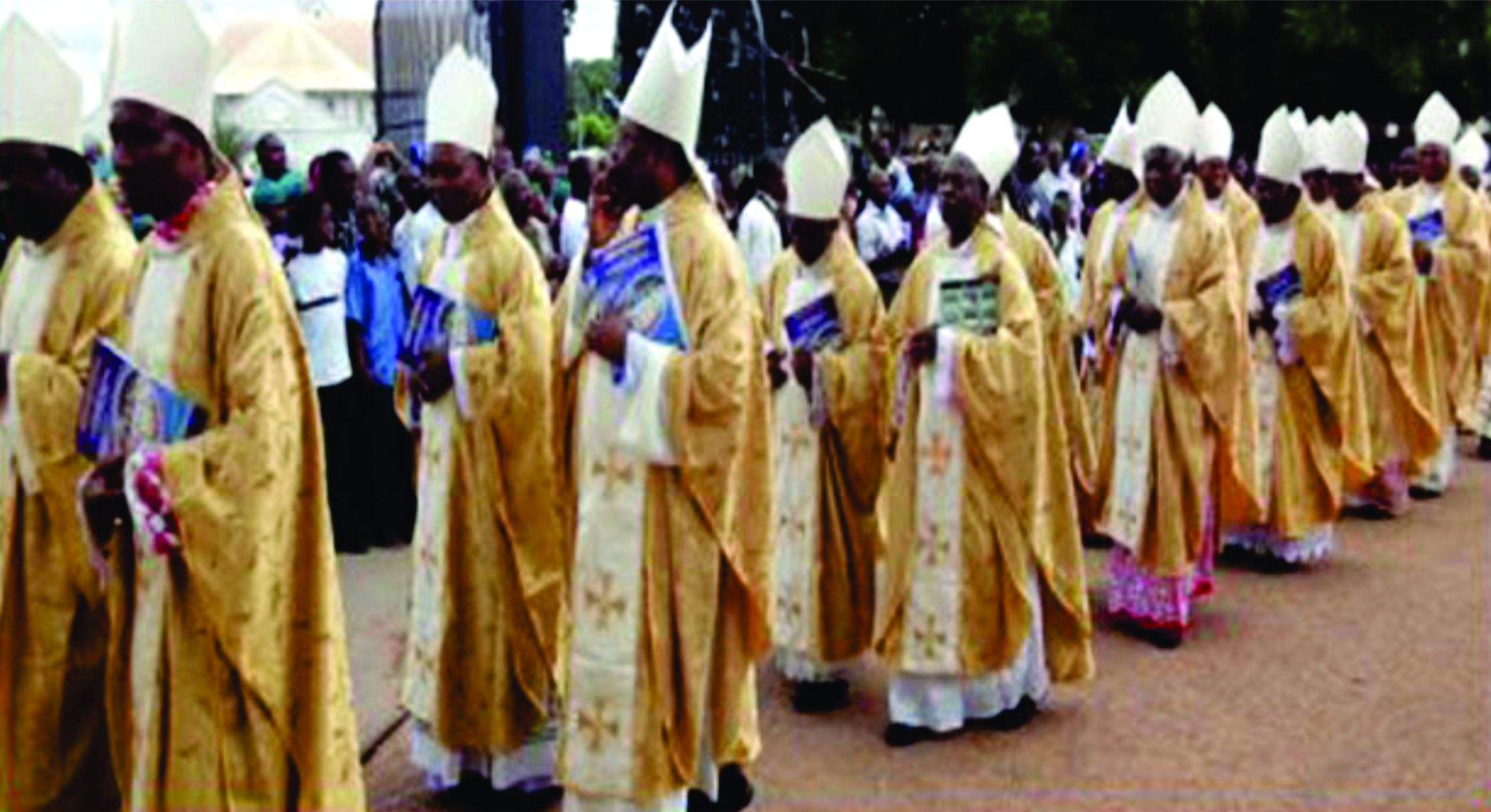 Nigerian Catholic bishops present a façade their group hates corrupt government. But the mouthy ones among them insist — for peace’s sake — President Buhari must let things slide

WITH over 20 million worshippers, the Catholic Church in Nigeria inches close to waving its ecclesiastical clout over Abuja—like the Vatican does in Rome. And if there’s any barrier along the way, the Catholic Bishop Conference of Nigeria will tear it down.

The CBCN has been marshalling the church’s crusade into the worldly for 59 years now. And their front has always been united until the last administration. Former President Goodluck Jonathan, with his associate Ayo Oritsejeafor, the president of the Christian Association of Nigeria, made a play for Christians’ votes to beat his rival Muhammadu Buhari for a second term in the last election. The CBCN, as a body, didn’t join the intrigue. But some of the bishops now express their biases for or against Jonathan and the screwballs in his government. And if that is a discord, it spells no good for papal influence on the most populous black nation.

As the Nigerian successors of Peter, James, John, and other Apostles of Jesus, the 54 representatives of Pope Francis claim (on their website) they club together for a purpose: to “speak and spearhead the teaching, prophetic and pastoral ministry of the Catholic Church in Nigeria”.

The group also believes it owes Nigerians another duty: promotion of human dignity, human rights,truth, justice, reconciliation, peace, and wholesome development. That gives it wide ranging takes on things as mundane as men wearing French letters during baby-making, the falling standard of education, INEC, LGBT legislation, abortion, the death penalty, and others. Well, on most of these issues, the bishops are on the same page as many Nigerians.

But the papists’ stands on the biggest of the nation’s problem—-corruption—-have never been united. To the group, corruption in Nigeria has become an abuse. The volume of loot traced to the last administration could have induced such conclusion. Buhari has confirmed about $150 billion of Nigeria’s wealth stashed abroad in the last six years. The ruling APC recently also said Jonathan couldn’t account for over N11 trillion before he left office.

“A government that is negligent in this regard assaults the intelligence of the citizen; this, too, is a gross violation of human dignity,” Archbishop Ignatius Kaigama, CBC’s president, said at the end of their 2013 first plenary conference in Abuja.

That position hasn’t changed. The archbishop now sees it as a war, and Buhari must win it.“We support this current wave against this deadly disease, because it will no doubt be a deterrent to those contemplating to corruptly enrich themselves,” he told newsmen days ago in Jos.

Kaigama just aired the groupthink of the CBC. Each of the bishops still has his mind. And the media-savvy among them have been spitting out their philosophies of corruption with respect to the last and present administrations. A conclave, on how Buhari should probe Jonathan, seems in the offing. You can’t miss the radicals among them.

Rev. Fr Matthew Hassan Kukah, the ranking bishop of the Sokoto Diocese, strikes you as the worldly-wisest of these priests of the Most High. He’s got under his cassock a master in peace studies and a PhD in African studies—all in Ivy League varsities in the UK and U.S.—on account of big donors like the Ford Foundation. He joined the order in 1976, probably with an oath to live and die a hermit walled inside some monastery praying to Virgin Mary and Jesus. His guts and genius, however, have made him a man about town. “If there is any clergyman in the country whose constituency is government, it is Bishop Kukah who has served every government in power in the last decade,” an angry official of the Christian Association of Nigeria said in 2012.

In spirit, and, indeed, in truth, Kukah, 63, is serving His Holiness in Sokoto. His brain, however, bubbles with ideas of how to save Nigeria. And he doesn’t scruple to fire them off—in speeches or print. “Aside from his books, his articles, paper presentations, rejoinders and interventions, papers in academic journals and other research submissions since 1980 to date as I personally compiled in his study, there are approximately over 5000 works,” said Samuel Aruwan, the Kaduna bureau chief of the Leadership.

Kukah has granted more than 1000 media interviews so far, and he’s been a delightsome talking head on CNN, BBC, and other world’s biggest media houses.And he usually knocks his audience dead with his brainpower.

But recently His Grace Kukah has been taking some aims at politics and governance—the shots many consider as misfires. And in some ways, those positions seem at a remove from the CBC’s.

The cleric has no regret. “I have my own brain and my own conscience,” Kukah told the Sun in 2013 while defending the Peace Committee’s position on amnesty for Boko Haram. “If there are things that the Pope says, unless they are matters relating to Catholic doctrines…but if it is about point of view about the weather or about politics or about economics, the Pope and I don’t have to agree.”

Kukah won’t have to agree with his CBC on how Buhari should handle Jonathan’s government corruption either. For the bishop, the former president didn’t fare badly. “We must never be distracted from the spectacular actions undertaken by former President Jonathan,” he told Rt. Hon. Yakubu Dogara in a meeting between his committee and the Speaker of the House of Reps last month.

Part of the actions was Jonathan’s concession of defeat in the March 28 poll. And the bishop insists Nigerians should be grateful to Jonathan for that—instead of all the noise about probing. “There is no such thing as probe in a democratic setting like ours,” he said. “What obtains is investigation, and once people lead and things are not right, investigation becomes necessary.”

He’s been doing the same hairsplitting all over the media, warning Buhari to be easy on Jonathan. Many take that as arm-twisting in the guise of peacemaking. “For any group as highly placed as the National Peace Committee to resort to subtle and scary blackmail to subvert and dampen this momentum of war against corruption is to say the least unkind cut if not ungodly cut,” said Conference of All Political Party’s spokesman Osita Okechukwu, after Kukah and his committee visited Aso Rock in August.

Lagos lawyer Femi Falana also said the committee is just out to protect the rich—not necessarily to seek due process. “So when my lord bishop was insisting on following the rule of law in dealing with corrupt people, of course it was expected,” said Falana.

Two other members of the CBC have been airing their views, too. Not as loud as Kukah’s, though. Cardinals Olubunmi Okogie and John Onayeikan don’t belong in the peace committee. So they don’t share the pacifist sentiment of Father Kukah towards Jonathan.

Okogie has never pretended Jonathan was the best thing that ever happened to Nigeria. The cardinal warned him his second-term ambition would either crumble or crush Nigeria. And even after Jonathan left the scene, Okogie wouldn’t spare him the rod. Only that he wants Buhari to look beyond the judiciary in probing Jonathan’s sleaze. ”I prefer something private and personal,” he told the Sun. “They have consciences like human beings; they’re Nigerians.”

Cardinal John Onayeikan also believes Buhari’s anti-corruption fight shouldn’t look like persecution. “We should try to avoid as much as possible humiliating or disgracing people who may indeed have tried their best to serve the nation,”Onayeikan said during a Catholics in Politics dinner in the FCT.

The archbishop of the Abuja diocese also seems to be adapting the Passion play for Jonathan. He asked Nigerians to pray.

Angelus, however, has some strings attached. “Our prayers can only truly be answered if we do the will of God as He has commanded,” said bishops from the Ibadan Ecclesiastical Province of the CBC in August. They, somehow, relish the turn of events so far as they rouse Nigerians to “cooperate with the current administration to bring sanity back into our country”. Kukah, who many now see as holding brief for Jonathan, knows sanity won’t come by giving Jonathan, with all his backlog of indictment, a hug for yielding the presidency to Buhari.

Maybe in Christendom, the former president deserves all the back rob some bishops, by revelation, think Nigeria owes him. It, however, doesn’t hit people straight between the eyes in world affairs, where things hardly come in apple-pie order.

So all that Bishop Kukah and his fellows in the CBC have said about the anti-graft war has just proved Their Graces are also human, on the upward march towards perfection. And Kukah, in particular, has hope.

In a short while he could become a cardinal, potentially eligible for papacy, the highest spiritual state a man attains and he becomes infallible. Then whatever Kukah binds on earth remains bound in Nigeria. And his pontification will rely on inspiration from God the Holy Spirit, not from his library shelves groaning with encyclopedias.

But, for now, the letter killeth.

The stress after the polio arrest