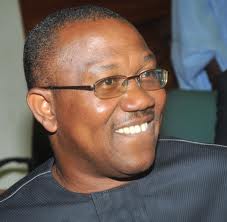 The trouble with Peter Obi is that he thinks that he is cleverer than everyone else. He maintains a bland and
colourless surface that conceals a grandiose interior. He talks with the voice of a woman in a labour but carries a heart of stone. He maintains a well cultivated religious outlook but his soul is the engine room of demons. The former governor of Anambra State reminds me of a luscious apple with a large maggot neatly embedded in its middle. So, can we really blame those who mistake him for a good man?

The trouble with Peter Obi is that he believes that no one else is smart enough to see through him; that he remains
opaque and enigmatic to people around him. He immerses himself in so many devious games of intrigue and subterfuge
– revealing only a side of him that he wants to share with the public; a side of him that seems pleasant and kind. But

beneath the surface lies a vicious puff adder. The side that stirs awake in the dead of the night to order a contractor to the Governor’s Lodge and demand a kickback for jobs awarded in broad day light. The disingenuous side that lays bobby- traps for his successor with the eleventh hour award of multiple contracts without any provisioning.

The trouble with Peter Obi is not just that he thinks that he could deceive the priests and the religious in Anambra State after forcing a wedge between the denominations and setting the house of God on fire by instigating bitter rivalries between God’s servants. No.
It is that Peter thinks that the rest of us would believe his innocence once he is decorated with high religious
titles and maintains the well-worn attitudes of false religion. Meanwhile, the landscape is still reeling from the
many horrors of his my-church-is-better-than-your-church policy which polarised brothers and split time-honoured
friendships. If Peter does not consider us all fickle and thoughtless he wouldn’t have left the Governor’s Lodge,
Amawbia, still asking whether Anambra is cursed. He would have accepted that he is the curse himself; the very pox
that has continued to corrode Anambra State even after his exit from power.

The other trouble with Peter Obi is that he believes that after stealing Anambra State blind, he could just
rustle up a ridiculous handover note and force-feed his voodoo accounting principles on the rest of us and we would
lap it all up without question and remain eternally grateful that we have been touched by an angel. What a cheek! Peter
thinks that because he spent all his years in Nsukka, “peddling stuff” rather than studying philosophy, we are
all addle-headed like him and would not remember or understand that in any accounting process, there are assets
and liabilities as well as credit and debit. So, he manufactured a aughable handover note that is full of dead
bodies and believes that by shouting about it from the rooftops, our attention would be diverted from him while he
enjoys his loot in absolute peace. Worse still, he believes that his spin doctors; Val Obienyem and Mazi Odera have all
the cunning and firepower to weave believable stories that would mislead probing eyes. So, he directed them to shout
about his phoney N75bn anytime Governor Obiano’s performance seems to attract a positive reaction and hijack
the encomium for the little god of Agulu.

Unfortunately, in his blind pursuit of vendetta, he fails to realise that many people are aware that no one in
his right mind would withhold or divert an applause meant for a governor who has proved himself with a resounding
performance in one and a half years. He forgot that sooner than later, people would begin to wonder if the great
achievements they are seeing all over Anambra State are still the products of the past administration which
“democratised poverty” with its famed “supermarket” knowledge of economics. They would begin to ask questions
about all the local government allocations in eight years and the huge security votes that have now been ploughed into
building poorly run shopping malls in Abuja and elsewhere.
People would also ask questions about the blatant rape of Anambra State, the award of contracts without due process,
the dubious collaborations with South African businessmen and the criminal neglect of Awka, the state capital, for so
many years. Naturally, they would shudder at the utter lack of big ideas in eight years and the disastrous entry into
national politics that cost Goodluck Jonathan a well-deserved second term and threw Ndigbo into a political
evil forest. Of course they would remember that Chukwuma Soludo had warned Jonathan of the inevitable consequences of having Peter as his adviser. But Jonathan did not pay attention. He had hoped that if Jesus had told Peter,
“Upon this Rock will I build my church…,” then, he too could build his second term hopes on the Peter of Agulu.
Now, it has dawned on Goodluck Jonathan that Obi is a different kind of Peter; in fact, that this Peter is no ROCK
at all!

The real trouble with Peter Obi is that he takes himself too seriously. Peter believes that his “clever”
politics of yester years is still valid today. So, he goes around visiting schools that he had starved of funds as a
two-term governor, handing out miserable N1m cheques while smiling impishly to cameras and hugging the widows left
behind by elder statesmen whose medical bills he had refused to pay while they struggled for life and making a meal of
the photo opportunities. And funnily, he believes that we are all conned into accepting this moth-eaten image of a
squeaky clean “St. Peter.”

The niggling trouble with Peter Obi is that he does not understand that you do not preserve a legacy by fighting for
them or constantly reminding the people about them. No. Once we struggle to preserve a legacy, it takes something away from it. Legacies are like monuments embedded in memory.
They are not easily washed away by the vagaries of time. They continue to announce themselves through the ages by the sheer force of their enduring value. A great legacy does not need the hagiographic skills of Val Obienyem or the praise songs of Mazi Odera. A legacy endures in the very lives of the people that it exists to serve. So, in striving to
preserve the roads he built and the cheques he handed to Mission Schools and hospitals, Peter Obi is unwittingly
calling attention to his lack of signature projects; his lack of a legacy. And the import of all this is not lost on
us.

In the end, the actual tragedy of Peter Obi is the fact that he has chosen to write his name in the dark chapters of
history. And no one should save him from his destiny. It is the road he chose to travel and the cobwebs of infamy are
waiting to engulf him as he journeys.

Share this on WhatsApp
Related Topics:Peter Obi
Up Next

The cats among the pigeons