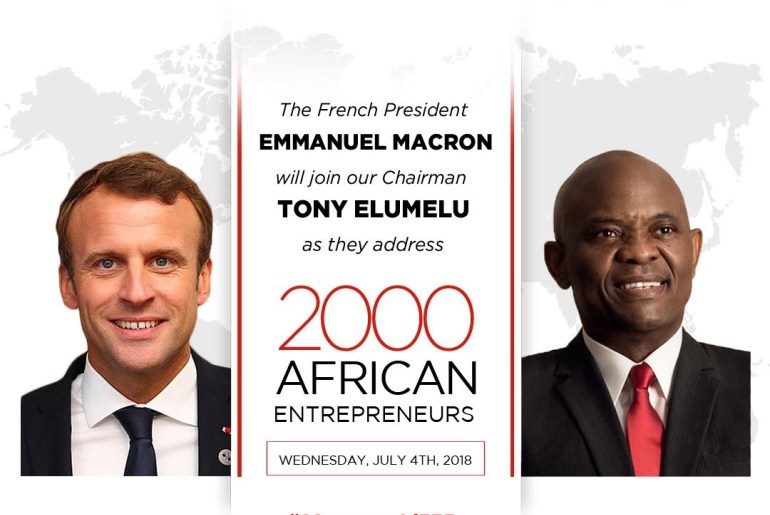 French President, Emmanuel Macron, has added to his one week itineraries in Lagos, an interactive session with the business community involving over 2,000 Tony Elumelu Foundation (TEF) alumni, including other significant members of the African entrepreneurial ecosystem in an open forum of free and frank exchange of ideas and opinions.

National Daily gathered that the Forum will provide opportunity for the French President to be acquainted with ambitions, challenges and prospects of the new generation of African business women and men, who are changing the narrative and historic perceptions of Africa, brought together by the Tony Elumelu Foundation.

The session will be hosted and moderated by TEF Founder and Heirs Holdings and UBA Chairman, Tony O. Elumelu. It would provide African entrepreneurs the platform to closely interact with President Macron, learn from his experience as one of the youngest Presidents in the world and someone who strongly champions entrepreneurship, while networking and forging partnerships with French and African business leaders and policymakers in attendance.

Elumelu remarked: “President Macron’s recognition that African entrepreneurs are the key to Africa’s economic transformation and his desire to connect with and elevate the voices of future leaders is transformational. It is our privilege to host the President and it is a clear acknowledgement of our core belief that entrepreneurship is the catalyst for the social and economic development of Africa; How better to reach the most catalytic young minds in Africa than through TEF’s unique network of hundreds of thousands of Africa’s brightest young entrepreneurs.”

The Foundation indicated that “the Tony Elumelu Foundation alumni attending the event are beneficiaries of a number of TEF programmes, including our groundbreaking TEF Entrepreneurship Programme, the $100 million commitment to identify, train, mentor and fund 10,000 entrepreneurs from across Africa over 10 years.”

The Tony Elumelu Foundation is Africa’s largest and most impactful African-funded, Africa founded philanthropy, working to empower African entrepreneurs. The Foundation’s unique position allowed the French President to engage directly with the next generation of young business leaders and share his vision for relations between France and the African continent.