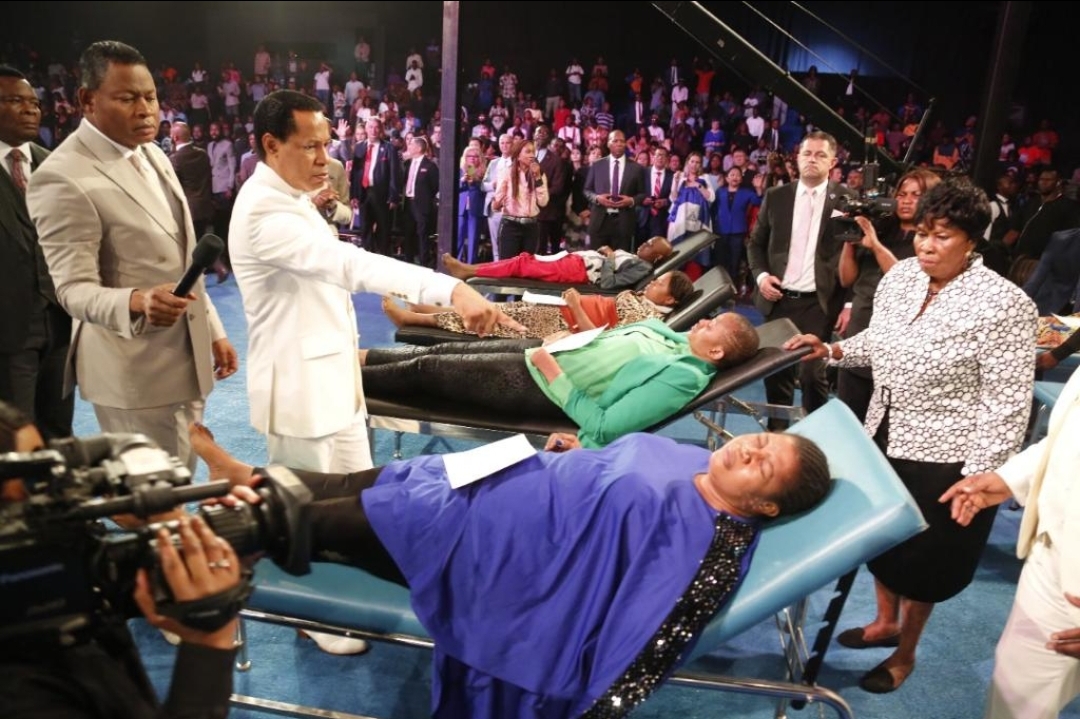 Millions of people who participated in The Healing Streams Live Healing Services with Pastor Chris Oyakhilome encountered a huge flow of God’s power and healing grace resulting in great miracles.

This is as Pastor Christ maintained that Christians’ weapon against demons who frustrate people, cause sickness and diseases, lure people into evil and wickedness remains the Holy Spirit.

Speaking about evil spirits, he declared: “There are many things happening in this world that are caused by evil spirits and demons.” He referenced the words of Jesus Christ in Luke 10:17 where the signs following those that believe in the name of Jesus are mentioned, the first being: ‘in my name they shall cast out demons”. 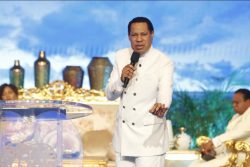 According to him, “Through the Holy Spirit, you can cast out demons. If you allow the word of God gain the mastery of your life, you will live above demons and their influences and you can stop them from influencing your life”.

The Media Manager, Christ Embassy Healing School, Mr. Olajide Babashola, highlighting the life changing miracles wrought, in the lives of participants during the live programme said: “With such a celestial first session that transcended all expectations, you could expect that the grand finale would be peculiar. While concluding the service on the first day, Pastor Chris said “I have some very important things to tell you tomorrow; things that will really help you and you would need the information. Nobody would probably tell you such things, but I’m going to tell you; by the spirit of God.”

“The service began at 2:30 p.m. (GMT+1), with worship led by the nonpareil Loveworld Singers. All around the world, participants poured out their hearts worshipping the Lord in songs. Opening the service, the Director of the Healing School, Pastor Deola Phillips, led the people in prayers of thanksgiving for the mighty things wrought by the Lord the previous day.

“She was stirred to prophesy: “I tell you anything is possible today. Don’t fear. Don’t worry. Don’t be concerned; the peace of God, the life of God and the light of God are coming to you in your home, you will not be the same again. You are next in line. Get ready to shout!”

“A worship segment followed, hereafter, Pastor Deola was joined by Reverend Tom Amenkhienan, a senior minister at the Healing School. They shared the impact and greatness of Day One of the Healing Streams Live Healing Services. Reverend Tom, read out a number of testimonies from different countries, Maria was one of those whose divine encounters were read out.

“Maria was healed from anorexia, bulimia, depression, anxiety and borderline personality disorder. She said she felt the cloud of darkness lift off her as the man of God ministered to her during the session. She’s been filled with joy ever since. 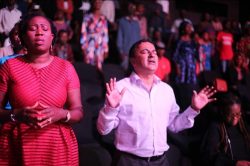 “Concluding the segment, Reverend Tom declared: “Don’t give up, the sickness will be the one to give up today! Your condition will change and you will live a normal life again. Prepare to testify.”

“The service continued on to the big screen, where Reverend Ray, another senior minister at the Healing School hosted live chats with participants in: Columbia, Japan and Thailand.

“These ones were so enthusiastic and overflowing with testimonies from their viewing centres. One of them was a lady in Colombia, with kidney stones and spine fractures, which had left her to live with unbearable pain. As Pastor Chris, prayed she was completely healed of her kidney and her spine. Prior to this time she couldn’t walk, stand straight or move her fingers, now she’s completely healed! She felt completely new.

“Reverend Ray, urged the participants to share their testimonies, in order to receive wholeness. He referenced the miracle of the woman with the issue of blood, who Jesus declared whole after she testified to having touched Him and received her healing. He said “send your testimony today so that wholeness will come into your life having received your miracle.”

“Another exulting session of worship followed, before live testifiers in the studio and callers shared their testimonies on a special segment with Evangelist Eddy Owase, a Senior Minister at the Healing School. There were numerous outstanding miracles shared.

Sophie Mtetwa, had been consigned to a wheelchair for 10 years, following a terrible accident which resulted in functional neurological disorder. Her moment with the supernatural came during the July 2022 Live Healing Services, where she was made whole. Sophie was unable to walk, stand, or bend over; today she demonstrated all this as she testified!

“Another touching testimony was that of four year-old, Celebrate Uteko, whose life was a tough struggle as he suffered from Hirschsprung’s Disease a congenital intestinal disorder, that was characterized by the absence of nerve cells, in parts of the large intestines resulting in extreme difficulty in passing stool. This ordeal started when he was five months old, robbing him of his infancy. 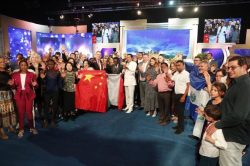 Some of the international participants who came from different countries to attend the onsite Healing Services.

“In June 2022, they were introduced to the Healing Streams Live Healing Services, which led to his significant turnaround. Pastor Chris ministered to young Celebrate during the July Healing Streams and everything changed. Celebrate’s health is now excellent!

To people all over the world, who needed healing, Evangelist Eddy said, “Your moment has come. This is your time, this is your hour, and your miracle is now. Go for your miracle. Congratulations to you!”

“Pastor Chris arrived, as the Loveworld Singers led in praise sessions. He proceeded to teach on Jesus and the gifts he brought for all. Reading from the scriptures, he showed that Jesus Christ came to give life, eternal life and without him, one would be living out of God’s plan. He expressed that there’s no salvation elsewhere and that salvation introduces a life of righteousness. He led those yet to receive Jesus in the prayer of salvation as this is the evidence that you now born again and belonged to Christ.

“He advised the congregation to attend church services, urging them to put away every feel of shame as regards attending church and serve Jesus Christ in truth. The day’s teachings were definitely special as Pastor Chris went on to share three crucial things: Drinking water was the first, he said “did you know that if you would just drink water, many drugs you take would not be necessary. A lot of sicknesses that people have, is simply because they don’t drink enough water. Drink water regularly it’ll help in your system. If you would drink water, you would hardly be sick.”

“Excellent toilet habit was another thing he shared with the congregation. Pastor Chris encouraged people to be patient in the toilet. He explained the importance of using the toilet frequently – and how noncompliance to this can lead to hemorrhoids and piles.

He said “don’t be in a hurry when you’re in the toilet. Remain there until something comes out. If you leave that for another day it’ll be worse.”

“Finally he spoke about evil spirits, “there are many things that are happening in this world that are caused by evil spirits, demons.” He referenced the words of Jesus in Luke 10:17 where the signs following those that believe in the name of Jesus are mentioned, the first being: ‘in my name they shall cast out demons’. These demons frustrate people, cause sickness and diseases, lure people into evil and wicked things.

“Praise God there’s a solution! “Through the Holy Spirit you can cast out demons. If you let the word of God gain the mastery in your life, you will live above demons and their influences and you will stop them from influencing your life” Pastor Chris emphasized.

Then the moment that was pregnant with great expectations came. It was a destined date for the miraculous, as the Loveworld Singers led in heartfelt worship, and Pastor Chris ministered to those in the studio, on the screen and people everywhere. As expected, demons fled, evil spirits checked out never to return. The excitement was glamorous, as many leaped, jumped, and danced in celebration of their healing. The Lord did mighty things!

“Jermina in Netherlands had breast lumps which immediately disappeared in the course of the service. A nurse in Canada received healing in her knees. All the way in Sweden, a young boy’s incessant cough stopped as the programme started. Roy from Kenya’s left ear popped open after 16 years of deafness. Virginia in the Philippines was lame, deaf and blind; she can now walk, see and hear!

“Testimonies are still pouring in, and there’s room for more. You can share your testimony here: https://healingstreams.tv/share-testimony.php.

The atmosphere of miracles continues as the streams of Healing will never stop flowing! What a memorable Grand Finale”.