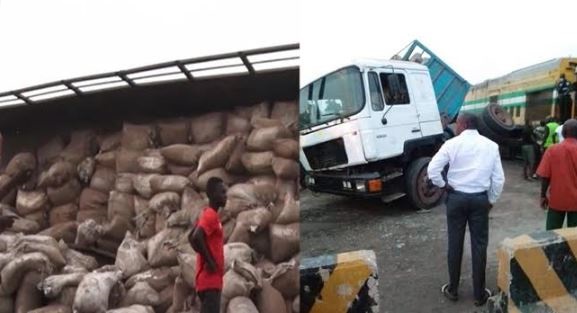 A train ran into a truck loaded with animal feeds on Monday at the Iju-Ishaga rail line crossing in Lagos State.

It was narrated that the truck driver failed to clear off the rail track before the train approached the cross line, pushing the truck off the rail line with the loaded animal feeds thrown down within the vicinity. It was gathered that no death was recorded.

The Lagos State Task Force on rescue operations arrived at the scene of the accident on time. They were said to have commenced operation trying to get the truck off the track to free traffic on the route.

The Search and Rescue Officer, Lagos Territorial Office, Wale Adedokun, was cited to have said: “Stakeholders are here from the Federal Fire Service, LASTMA, LASEMA, and others are all on the ground. The truck that will remove the trailer from the track is already on the ground.

“We are attempting to remove its content- the animal feed – so that it will be easy for it to be removed from the track.”