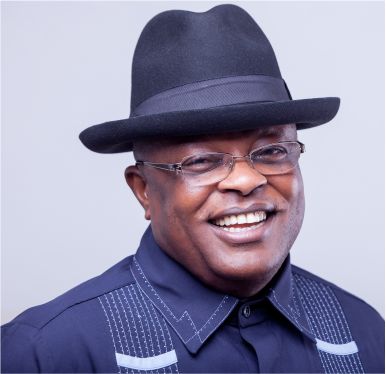 The Ebonyi State Governor, Engr. David Nweze Umahi, has flagged off the construction of the Ivo Water Project estimated at over N1.2bn.

Speaking at the ceremony in Amagu Ishiagu, Ivo Local Government Area, Umahi disclosed that the project which was conceived when he was a deputy governor was a Federal Government-assisted project.

Umahi, who commended Senator Anyim Pius Anyim for his contributions towards the realization of the water project, said, “We requested for assistance from the Federal Government for this Ivo Water Project.  It was supposed to be for Ishiagu alone, but we decided to expand it to reach Akaeze community and also get to our model rice mill in Oso Edda.”

He said that 70 per cent of the money needed to complete the project was ready, stressing that the counterpart funding from the Federal Government was also available with the state government.

Umahi, who used the occasion to thank the people of Ivo LGA for their support   during the last governorship election, assured them of the provision of roads and electricity.

“Roads are still coming, electricity will still come,” he assured, stressing that when the water project is completed, the  government will be proud to say that the water need of the LGA has been solved.

Earlier in an address on the occasion, the   Commissioner for Water Resources, Engr. Francis Orji, stated that the project which has a 12-month completion period was awarded to Chap Construction Limited at the cost of N1,203,824,347.44.

Orji thanked Governor Umahi for his huge investments in the water sector and assured of the commitment of his ministry “to ensure that the project is started, executed and completed in the most professional manner”.

The governor told Uburu people to hold the Commissioner for Power, Chief Emmanuel Uguru, responsible if there was any part of Uburu without electricity.

He said, “Our agreement is for this (electricity) to get to every part of Uburu so that for years, Uburu will not ask for electricity again, and from there we will go to another community anywhere in Ebonyi State.”

The governor announced with regrets, attempt by some people to vandalize the electricity cables and directed that the suspects must be prosecuted.

He charged Uburu people to protect all government investments in their area, warning that any vandalized   public utility would   not be repaired.

Umahi said, “You have to   guard   government’s investments.  This is your own dividend of democracy.  So any one vandalized will not be repaired.”

The governor thanked Chief Uguru and his team for their commitment in delivering on set goals.